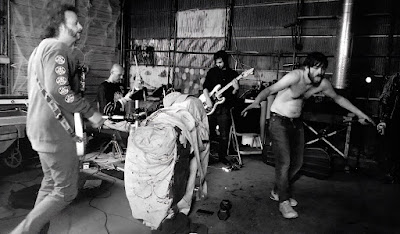 Creepy Oklahoma City rock band Chat Pile have only recently released their debut album (which I loved! Check out my review here) and they’re already back with new music. In fact, they’ve spent the last few months writing the score for a movie – a dark low-budget drama titled Tenkiller. This song comes off the soundtrack and it’s a typically sinister rock jam made up of dissonant guitars and unnerving sprechgesang. There’s no anguished screaming this time around, but things do still get pretty brutal around the 3:30 minute mark. The band have also released another song from the soundtrack titled ‘Lake Time (Mr. Rodan)’, and it’s even more horrific (it’s a country song...).

UK post-punk band Shame released their last album in 2021 (another album which I absolutely loved!) and they’re also releasing new music. This new single ‘Fingers of Steel’ is set to appear on an upcoming album titled Food For Worms, which frontman Sheen has described as ‘the Lamborghini of Shame records’. ‘Fingers of Steel’ features the band’s signature fidgety instrumentation paired with some passionate sprechgesang from Sheen (yes, I’m loving the word sprechgesang this week). An accompanying music video meanwhile features the band creating fake online accounts to hype up their music.

New Zealand rock duo Murgatroyd have an excitingly noisy and unique sound that’s somewhere between Idles and Mastodon in style. Their latest single 'Sundowning' opens with some suspenseful guitars topped with what sounds like a woodblock (perhaps something eerier? A skull perhaps?) and some vaguely bluesy vocals, and then it builds up into an intense chorus accompanied by some rapid-fire snare. We’re also treated to a sludgy breakdown at the end of the track that plays out like some ominous monster trudging through a swamp. The track comes off their new EP titled Sundowning.

R&B vocalist Kelela has been on a roll with these recent singles. Her voice sounds sultry as ever on ‘On The Run’ and the production is mind-blowingly good (those synths at the 3 minute mark give me Kaytranada vibes). A new album is set to drop in February titled Raven – her first album since 2017.

This is another beautiful song from London based singer Jackson Mico Milas (check out the last single I reviewed, ‘The Bay Fire’, here). It features more gorgeous jazzy pianos, accompanied this time by some folksy guitars. Jackson’s vocals have a fragile faraway feel to them that’s truly captivating. It comes off the ex-High-Highs singer’s new solo debut album Blu Terra.

‘If Jesus Was A Rockstar’ - Kim Petras

There’s already a song in the charts about Jesus doing cocaine on a night out. And now there’s this new pop song about Jesus stage diving and getting kicked out of bars. Why are there multiple party anthems about Jesus? What is this madness?