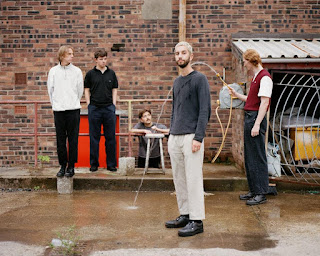 Humour’s last single already had some pretty chaotic vocals, but ‘Pure Misery’ (the title track from their upcoming EP) seems to take this chaos to the next level. These are quite possibly the most hilariously batshit insane vocals I’ve heard all year (and there’s been no shortage of rock songs with batshit insane vocals in 2022). The stuttering, warbling vocal freakout is in fact intended to poke fun at the idea that a frontman always has to have something meaningful to say to be taken seriously. Rather ironically, this gives the track meaning. Such irony is hardly surprising coming from a song called ‘Pure Misery’ by a band called Humour. Or perhaps the real irony is me attempting to find meaning in a song that is intentional garbled nonsense? Whatever the case – the song slaps!

Continuing in the same noisy post-punk vein is this new pummelling single ‘Fossilised’ by Leeds rock trio DENSE. The scream-along chorus is a belter and the fuzzy riffs are equally badass (I’m loving the metallic squealing guitars and descending/ascending bass at the 2:40 mark!). The track strikes a nice balance of fun and menacing. If you love noisy rock bands like Idles and Chat Pile like me, then this is certain to hit the spot.

‘Washed Away’, Kelela’s last single, had no percussion. This time it’s all about the percussion – the track is an energetic drum-and-bass-flavoured banger. And yet, despite being a complete change of pace, the alternative r&b singer is still able to glide effortlessly over the top with her silky vocals. Although there’s been no announcement, I get the sense there’s a new album coming out soon.

I get so many wishy-washy piano ballads in my inbox that whenever a video opens showing a man at a piano, I automatically start reading the next press release. But this track stopped me dead in my tracks. The production here is absolutely gorgeous – those warm swells of piano wrap you up like a blanket. And Jackson’s soft pensive vocals are perfectly positioned in the mix for maximum intimacy. Meanwhile, there’s some beautiful imagery in the lyrics that really gives you that sense of missing someone: ‘calling to the ships/ from a light on the cliff/ my soul is on the beach’.

London rock duo Jadu Heart deliver this shoegazey slice of indie rock titled ‘I shimmer’. Everything from the opening screaming guitar to the psychedelic desert-based music video feels very 90s, but in the best possible way. It’s like all the best bits of 90s alt rock in one song.

‘Edging’ is so sleep-inducingly dull, Blink-182 should consider renaming themselves 40-Winks. Okay, that’s a bit harsh, but am I not the only person that thinks this sounds a tad flat? Travis is holding back on the drums, and both Mark and Tom sound like they’re heavily relying on auto-tune. I wasn't feeling California, and I'm not feeling this either sadly.