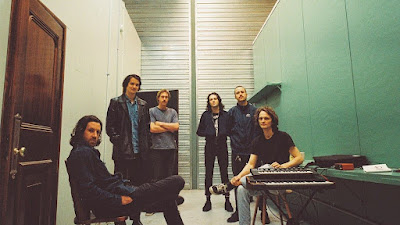 I seem to have gone on a rock binge this week. No other genres got a look in. Artists featured this week include King Gizzard & The Lizard Wizard, Liturgy, Polyphia, Little Thief and Raavi.

Prolific Melbourne rockers King Gizzard & the Lizard Wizard already have 20 albums under their belt and have plans to release another three albums this year! As with every new record, they’ve decided to change up their musical style. If this nine-minute single ‘Iron Lung’ is anything to go by, the next album is going to be a sprawling jazz fusion record. I would argue that ‘Iron Lung’ is one of the most fun tracks the band have released thus far – it’s a lively barrage of bustling drums, groovy bass, wah-wah guitar and jazz flutes that plays out like a live jam session (it probably is a live jam session). There are influences of Hendrix and Santana, and even some Black Sabbath at the 6 minute mark. UPDATE: The first of their three new albums Ice, Death, Planets, Lungs, Mushrooms and Lava is out now!

What’s up with the lengthy songs this week? This one is 15 freaking minutes long! In typical Liturgy style, the band pack these 15 minutes with some of the most grandiose and ambitious black metal they can muster. The track is an epic journey taking us through proggy Meshuggah-like guitar grooves, deliberately unfitting twinkling celestas and alarming glitch-out moments. It ends with a crescendo of tremolo guitars, orchestral strings, anguished screaming and berserk drumming. It’s creative and technically impressive, even if it does leave you utterly exhausted afterwards.

Charlie and Rhii of Bristol band Little Thief recently announced this new single, a new tour and their engagement. Congratulations! ‘Lost in Love’ sees the couple marking the occasion with a song about being overwhelmed by love. Don’t worry, it’s nothing too soppy. In fact, the guitars and drums are still mean and there’s a really cool bass riff in the verse that almost gives me a moody reggae vibe.

Raavi is a Boston-based band led by indie rocker Raavi Sita. This latest grungy/shoegazey single ‘no bodies’ features a cool mix of twangy and ethereal guitars topped with weary vocals: ‘don’t tease me/ my heart’s too weak’. According to Raavi herself, the song is about ‘the stress of likability and measuring one’s own worth’.

This upcoming Arctic Monkeys album sounds like it’s going to be fairly hit and miss. ‘There’d Better Be A Mirror Ball’ had some compelling haunting instrumentation, and there was a true sense of heartbreak in the vocals. But in the case of ‘Body Paint’, there’s none of that suspense or emotion – Turner’s falsettos sound awkward and the instrumentation slips too far into cheesy lounge bar territory.