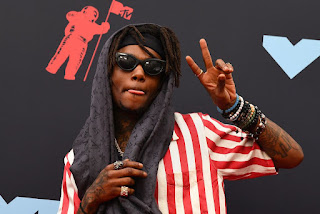 R.I.P The Queen. She was an avid reader of this blog. She rang me up personally one time to tell me that she was a big fan of my experimental hip hop and metal reviews. But I won't bore you with that story. It’s time to talk about Arctic Monkeys going jazz, robot rappers and the new JID song. I haven’t done one of these roundups in three weeks, so there’s a shitload of music here to make up for it. Artists featured this week include JID, Arctic Monkeys, Danny Brown, Wednesday, Humour, Himera, Janna Pelle and FN Meka.

Atlanta rapper JID is truly showing off on this track. His ability to rhyme and tell a story feels so effortless. The production meanwhile is phenomenal. The track contains a staggering 10 beat switches! Forget prog rock - this is prog hop. Apparently, this track was intended to be the outro of his new album The Forever Story, but for some reason didn’t make the cut. It’s a shame because it would have been the perfect closer.

Arctic Monkeys are a long way from their loud scuzzy roots. With its jazzy piano stabs and cinematic strings, the instrumentation on this new song isn’t far off sounding like BADBADNOTGOOD. It’s not too surprising at this point – Tranquilty Base Hotel & Casino was already a much slower album. ‘There’d Better Be A Mirror Ball’ is even slower, but it’s also one of the most gripping songs that the band have released in years. Alex Turner’s heartbreak-fuelled crooning and that brooding oscillating synth that plays throughout makes the song very haunting and suspenseful.  I’m interested to hear if the upcoming album will all be like this, and if so what the general reaction from fans will be.

‘Winter’ is an apt title, because Danny Brown’s bars are sounding ice cold on this track. I’m also digging the woozy beat and the lo-fi production. The track was released with literally no press information surrounding it. Not even a social media announcement. Is a new Danny Brown album on the horizon? Or is this a one-off single? Whatever the case, it’s good to hear Danny’s squawking voice again.

This eight minute song from Asheville band Wednesday is pretty damn intense. Singer Karly Hartzman has a really unique vocal tone that sounds like its about to veer off into sad wailing at any moment. And that’s kinda what does happen at the end of the track – elongated Mortal-Kombat-inspired cries of ‘finiiiish hiiiim’ turn into anguished screeches. The instrumental composition is pretty wild too, featuring grungy guitars that switch from soft twanging to distorted fuzz, constantly changing direction before slowing to a shoegazey drone at the end. The lyrics meanwhile seem to be about the cruelty of the world told largely through the bloody scenes of a bullfight.

Humour are another rock band with utterly unhinged vocals. The opening verse is delivered with the hysterics of someone who’s about to stab a fork in their eye or drive a car through a shop window. Along with the frenetic guitars and erratic drum beat, it makes for a pretty challenging listen. Fortunately, the chorus is very melodic, providing some mercy from the mayhem. It’s overall a pretty thrilling track. The Glasgow band will be dropping an EP later this year.

Electronic music has been all about that bass for too long. It’s time for a treble revolution. With its speedy twinkling arpeggios of synths and pianos, Himera’s ‘Umbrella’ is a creatively shrill instrumental that succeeds at being banger without having to resort to a dirty bass drop. Part of this comes down to how face-meltingly fast the track is (especially that sped up section in the middle).

‘Ever’ is a truly gorgeous track that consists of warm staccato synth chords and longing vocals. It’s also got some pretty heartfelt lyrics. According to Pelle: “This song is an exploration of the meaning of 'forever'. In the first verse/chorus, I am talking to my Dad - and how I've realized through his death that love really does last forever - it hasn't diminished, and is like a phantom limb."

Yeah, this is that AI rapper everyone has been talking about. I predicted this type of thing may happen in this shitty post I did a few years back. The backlash is encouraging because it shows that the world isn’t quite yet ready to let robots take over the music industry. However, it is worrying just how convincingly human the vocals are and how this could quite easily be an upcoming trap rapper. Or maybe that’s proof of just how robotic mainstream rap has got.