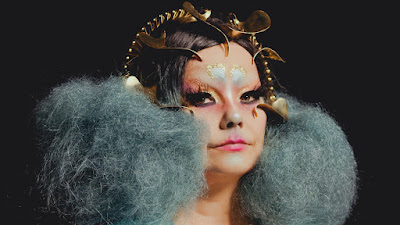 I’m not feeling the new Bjork song, but otherwise this week has plenty of bops. Artists featured this week include ALASKALASKA, Wooze, Omar Addis, AJAY, DRAM and Bjork.

TV can be a great form of escapism from the world’s problems (providing that you avoid the news channels). At the same time, watching too much TV can make many of us feel guilty, as if we’re wasting away the day. Written during lockdown, ‘TV Dinners’ is a song about this bittersweet feeling of bliss/guilt when watching TV. The cold synth bass, folksy arpeggiated guitar and repeated delivery of ‘another TV dinner, not the news’ all contribute to the track’s wistful tone. Like watching TV, it’s hypnotic.

‘Huge Axeman’ totally sounds like Hugh Jackman, which I’m sure is intentional knowing these guys and their loopy sense of humour. The track features their signature blend of 80s crooned vocals and aptly choppy axe riffs, delivered with a cartoonish energy that is perfectly matched by a He-man themed music video. So far, every cut I’ve heard from their new EP has slayed. I’ve got no axe to grind with any of it. Why haven’t I already given their new EP a butcher’s? I better listen to it sharp! Come on, Alasdair, chop-chop! (Alright that’s enough dreadful axe puns…)

I featured Cardiff singer/producer Omar Addis a couple years ago on this blog with his moody groovy single ‘Aperture’. This new song ‘Never Let You Go’ features some gorgeous hazy guitar topped with forlorn vocals about not letting a partner go. It’s a bit more uptempo than ‘Aperture’, but also slightly more haunting.

Philly psychedelic r&b singer/producer delivers an array of heavenly sounds in this new track ‘Swindlers’. The opening fluttering of synth hooked me in and the slinky bass and smooth vocals kept me hooked. The harmonised electric guitars and angelic ahh-ah-ahs at the 1:40 mark was the moment I knew this was best-tracks-of-the-week material. It's just an insanely pretty track.

Last year Virginia singer-rapper DRAM changed his stage name to ‘Shelley FKA DRAM’. But he’s already given up on that stage name and is now calling himself DRAM again (does that mean we have to start calling him ‘DRAM FKA ‘Shelly FKA DRAM’’?). His latest single ‘Wham’ is a jam. With its raunchy lyrics and smooth instrumental, it’s the perfect song for a steamy lovemaking session – albeit an under-three-minute-long lovemaking session. WHAM! BAM! THANK YOU, DRAM.

The new Bjork song is sadly quite boring (bjoring?). She used to deliver hooks, but now it's all meandering melodies that lead nowhere. As for the abstract production, it briefly livens up once the distorted drums kick in, but otherwise feels just as directionless.