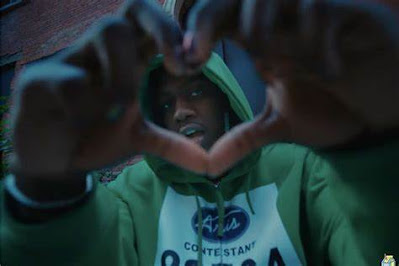 All hail MS Paint, the best Microsoft program to ever exist except maybe Full Tilt! Pinball. It’s a pretty fitting name for this Mississippi hardcore band, whose sound has a very nostalgic digital feel to it. Weaved into the guitars are woozy retro synths and electronic drums. The mix of heavy guitars and retro synths kinda reminds me of nintendocore group Horse The Band (yes, nintendocore is a real genre. Check it out!), except this band take a more vaporwave-flavoured direction.

‘Living Will or Living Well’ – Their/They’re/There

Their/They’re/There are a Chicago math rock band. ‘Living Will or Living Well’ is their (they’re? there? No definitely, their) latest single and it’s so much fun! I was pretty much sold as soon as that chaotic-yet-melodic opening riff came in. In fact, ‘chaotic-yet-melodic’ seems to sum up the whole track pretty well – the listener gets thrown around like a ragdoll, and yet the vocals and guitars hit all the right sweet notes. The track comes after a 9 year hiatus and will appear on their debut album Their/They’re/Three.

Edinburgh duo No Windows consists of 18-year-old singer Verity and 16-year-old multi-instrumentalist Morgan. Their latest single ‘Shout (Red Song)’ is exciting stuff for two musicians so young. It’s a mix of enchanting dreampop vocals and ethereal lo-fi production. I love the distorted fizzling cymbal that drives the track along – the drums are very buried in the mix, but just clear enough to give the track a steady stomp. ‘Shout (Red Song)’ is set to be one of three singles, each related to a colour and available on a limited tape.

I said there were some cracking band names this week. Man/Woman/Chainsaw is a London post-punk band with unhinged spoken word vocals. Their latest single ‘Any Given Sunday’ grows in intensity around a gloomy guitar riff before breaking into a mariachi-flavoured crescendo while interpolating ‘Swing Low, Sweet Chariot’. There are some obvious similarities to BCNR (especially in the vocals). At the same time, the song still feels uniquely wild enough to set these guys/girls/chainsaws apart.

Experimental r&b/soul artist Ehiorobo remains criminally underrated. His latest track ‘Beyond The Stars’ contains a chopped-and-screwed vocal performance over a glossy electronic beat. The vocals sound almost Michael-Jackson-esque at points as a result of the pitching up. For those who are interested, there’s also a ballad version of this song without the vocal edits that really shows off Ehi’s unique voice.

Songs are getting so short and lazy nowadays that they barely classify as songs. We’re given only a single verse here and it sounds like he improvised it on the toilet. The quivering auto-tuned delivery of ‘I took the Wock’ to Poland’ is pretty catchy though.