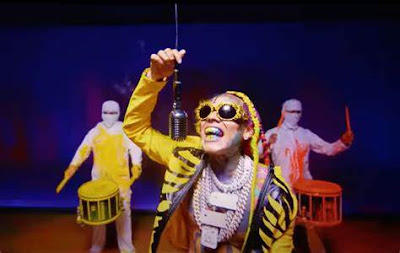 2022 gave us an array of awful viral TikTok songs, horrible soundtracks and unnecessary covers. I’ve rounded up the 10 worst examples I could find here.

It’s that wonderful time of the year where I rummage through the trash. This year has everything from songs about Jesus doing cocaine to sweary nursery rhymes. I do think there have been much worse years than this. However, you should still approach the following tracks with caution – once you’ve heard them, you won’t be able to unhear them.

As always, I plan to follow this up with my favourite tracks of the year. Hopefully, I’ll get that list published before the end of this year, but we’ll see – I’m always pretty slow at delivering these lists. Anyhow…

First up, we have this 80s-flavoured power ballad written for the new Top Gun movie. Can someone explain what is going on during the first few seconds of this track? Did Gaga just malfunction? Also, can we talk about that chord progression during the chorus? It’s 2022. WHEN ARE MUSICIANS GOING TO STOP USING THOSE CHORDS??

Well done Drake for making it into my worst tracks segment THREE YEARS running. This year’s annual contribution sees the Canadian singer/rapper embracing house music. The first half of the song isn’t too bad, but then Drake starts sporadically moaning ‘falling back on meeee’ over and over again – and he doesn’t stop.

8. 'Messy in Heaven' – Venbee and Goddard

‘I heard Jesus did cocaine on a night out’. Hmm, I don’t remember that part in the Bible. These lyrics are a bit much, and I'm not even religious. The drum n bass beat’s pretty decent though.

For some inexplicable reason, 2022 gave us two songs about Jesus going on a wild bender. He’s not doing cocaine this time around, but he is crowdsurfing and getting kicked out of bars. Why is this track worse? Because it’s also sonically dull as dishwater.

6ix9ine deserves to be ‘Lock-l-lock-l-lock-lock’ed up again for that clunky hook – it’s a crime against music. The fact that the whole song is an energy drink promo is also not cool.

Bebe Rhexa and David Guetta take Eiffel 65’s ‘Blue (Da BaDee)’ – the silly and fun Eurodance classic – and turn it into the most soulless party rework imaginable. Why was this necessary??

Continuing with the theme of unnecessary covers, check out this St Vincent cover of ‘Funkytown’ for the new Minions movie (the soundtrack of which features an absolutely wild choice of musicians). I am a HUGE St. Vincent fan, but even I can’t defend this. These vocals are downright horrendous. It’s like listening to a robot getting waterboarded.

The worst TikTok music trend to become popular in recent years has to be angry sweary break-up songs – specifically those sung to the tune of nursery rhymes. 2021 gave us Gayle’s obnoxious ‘ABCDEFU’. 2022 has meanwhile given us this monstrosity ‘Twinkle Twinkle Little Bitch’ – a song that doesn’t even try to be clever with its use expletives. What next? Little Miss Fuck-It Sat On A Tuffet?? One Two Fuckle My Shoe?? Oh God, I’ve just remembered that ‘DDLG’ track from a couple years ago …

I’ll be honest, I wasn’t expecting much from a Rae Sremmurd song called ‘Community Dick’. An out-of-tune hook from Flo Milli, sung for no reason at all to the melody of ‘Jingle Bells’, was definitely not on the cards. And the squeaky bedspring sound effects pinched from Drake’s ‘Currents’ was a pretty unpleasant surprise too. It’s as if they deliberately plotted to make the most annoying song possible. ‘COMMUNITY DICK DICK DICK DICK *squeaky bedsprings*’ is now stuck in my head like an inoperable brain tumour.

He’s done it again. After topping my worst songs of 2021, Kid Rock has also topped the worst songs of 2022. This year’s sweary rap rock song outdoes its predecessor with an even higher ‘fuck’ count and even more conservative cliches. After three verses of telling various groups and individuals to fuck off, the track then rather comically tries to turn into some rally anthem for ‘love and unity’, featuring some of the most cringeworthy lines ever written: ‘CLIMB ABOARD THIS LOVE BOAT/ AND ROCK THAT BITCH UP AND DOWN THE COAST’. It’s a true disaster-piece of a track that’s impressively awful in just about every way. CONGRATULATIONS KID ROCK 🍾🎉💩