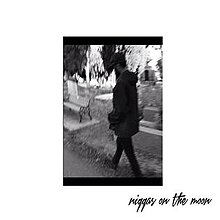 So this isn’t officially an album. Its half an album that has been deliberately leaked - disc 1 of what will be a double album from experimental hip hop group, Death Grips.

There’s not much I can say about this group other than that they’re fucking out there, constantly pushing musical boundaries, doing things that no other musician has tried before. My review of their last album Government Plates should be more insightful.

This new half-album-thingy is entitled ‘N****s on the moon’ and will be disc 1 of Death Grips’ upcoming album ‘the powers that b’. This is different to anything death grips have ever done before for a variety of reasons:


First time I listened to this, I wasn’t sure whether I liked it. I’m still not sure if I like it or not and so there won’t be a star rating at the end of this review (it’s only half the album anyway and I’ll give it a proper review once the whole thing drops).

Off the bat, I really liked the glitchy Bjork vocals. They give off a unique sound I’ve never heard before. I also like the fact that MC Ride shouts less, as his lyrics are clearer as a result. Romantically named tracks ‘Have a sad cum’ and ‘Fuck me out’ get more sexual than anything Death Grips have previously released, which is interesting. What I’m finding hard to get into is the ever-changing rhythms and busy instrumentals. There’s a sense of groove and cohesion that’s missing – something that really hooked me to Death Grips in the beginning with tracks like ‘Takyon’ and ‘Guillotine’. Indeed, this messiness does help to create that disorientating, ‘noided’ feel that Death Grips are all about – but it also makes the whole thing less infectious and less catchy than previous releases.

Check out ‘N****s on the moon’ down below, if you haven’t already. Leave a comment, tell me what you thought about this semi-record-thingymajig and have a nice day :)