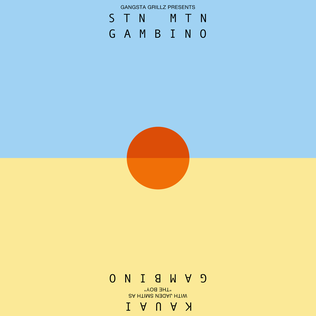 Childish Gambino is the musical alter-ego of Community actor, Donald Glover. I was a big fan of his last album, Because the Internet, (review here) and after hearing the single ‘Sober’ was pretty excited for this new release, ‘STN MTN/Kauai’.

As it turns out, this is essentially a double album. The first half, ‘STN MTN’, (shorthand for Stone Mountain) sees the actor-turned-musician donning his swag and trying to be a trap rapper, spitting over bassy instrumentals made of 808s and club synths. The second half, ‘Kauai’ (named after a Hawaiian island), in contrast is a selection of red-wine-and-slow-dance soul jams, reminiscent of Frank Ocean and Pharrell Williams. The two sides are polar opposites musically. Some people have been calling this a double ep, a double mixtape, a half-ep-half-album. Honestly why does this record terminology to be so complicated? Why can’t we call everything that’s longer one track an album and be done with it.

Talking of complicated, the supposed storyline that took place on Because the Internet continues on this album. I never did follow the narrative on the last album. Apparently, there’s a script available for fans to read who are struggling with the whole storyline thing, but quite frankly I don’t know who’s going to read that shit. Personally, I don’t listen to music for a plot. That’s what novels and films were made for.

So let’s ignore the storyline in this review and just discuss the sound of STN MTN/Kauai. Does this ambitious one-side-trap, one-side-soul concept work? Is Childish Gambino sounding as good as he was on his last record?

Sadly no. There are a couple big issues with this record, one being the severe lack of wit in comparison to his last release. Gambino’s punchlines and social commentary were a major factor in getting me into liking his material. Here, it all seems not up to scratch. On the trap side, Glover seems too busy getting his swag on to throw out anything intelligent and on the soul side he’s too busy getting soppy. This is a shame as it doesn’t give this album quite the personality his last record had.

The other big problem is the second half feels unfinished. There’s a demo track here called Retro (granted, it doesn’t sound like a demo, but I’d rather here the complete song). There’s also an unnecessary rehash of ‘3005’ from Because the Internet. It feels like Glover just chucked it in last minute to pad the Kauai side out.

The third big problem is that Jaden Smith makes a guest appearance on this record. Pretty self-explanatory.

Saying all this, there are some good moments here that do prevent this from being utterly bad. The instrumentals are by and large pretty damn good. No Small Talk is a banger and The Palisades features a funky beat that could be air supply. When it comes to the technical side, Gambino’s also dropping some of his best flows to date on this record and his singing is like velvet on the ears. The overenthusiastic DJ skit is also hilarious.
★★★☆☆