Review of 'Born Under Saturn' by Django Django

Not much has changed and not much needs to. Arguably the songs feel a little denser this time around. Django Django squeeze in as much instrumental layers into each track as possible, piling synths upon synths. Pianos seem to be more prominent, playing out bouncy rave grooves as found on ‘Reflections’. Everything is overall a bit more epic – less the work of a band and more the work of an orchestra. However, the dancabililty is still there ( is that a word?), which is after all what separates Django Django from the slightly-head-bob-inducing rhythm of most other indie bands. 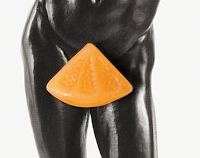 Lyrically things are still a bit goofy, the subject matter remaining slightly childlike, but I’ll take goofiness over preachiness any day. Django Django are all about playful fun and thankfully the group haven’t tried to mature their sound into something stoic and boring. As for their band name, I’m still none the wiser as to what it means.
★★★★☆