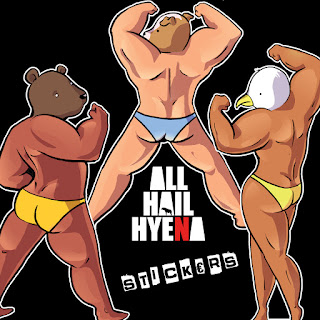 Listen up. Limber up. Lube up. Pyjama-wearing sexually-frustrated psych rockers All Hail Hyena are back and they’ve got another batch of infectious twangy guitar anthems to rock out and knock over other people’s drinks to.

Last year, the Burnley band released Damp Detector – an EP selling on Music Glue for a million quid, whilst alternatively streamable for free for all the non-multi-millionaires (check out my interview with the group here). Twisted sexual lyrics and erratic vocals that shifted between airy singing and metal growling in an instance proved that this was not just another boringly sane indie band. However, neither were they just a bunch of fun-loving fruitcakes, showcasing a serious ear for songwriting and some inventive instrumentation.

With this new instalment S T I C K € R S we get three new songs, and two pieces of old material ‘Man Up’ and ‘Complicate Tu’. Other than some buffed up production and a newfound love for drum fills, the group haven’t done much to alter their sound on this record – which is a good thing. The new tracks all feel like worthy additions. Opener ‘Way Ho!’ gets off to a slow start, although its humorously dark lyrics make up for this, alongside its catchy ‘Way ho’ chants in the latter half and following guitar outburst. ‘Sabbathian’ is a raucous bluesy jam that makes you want to freak out or have a seizure or both. Final track ‘Debbie Loves Her Neighbours’ meanwhile kicks off with some Pixies-esque strumming before tying off the album with a stomping and epic instrumental climax.

It’s all creatively composed, each song darting off on its own wild trajectory but always remaining terse and tuneful. A full record might allow these demented UK rockers to really push their sound to its full potential. For now, this canapé does well to satisfy my appetite.
★★★★☆