Review of 'Queen' by Nicki Minaj 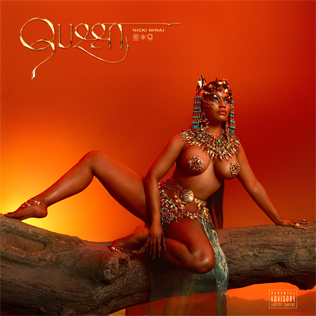 Does Nicki Minaj deserve the title of 'queen', or is her plastic butt not worthy of the throne?

Let’s not pretend Nicki Minaj is the queen of hip hop. Although she can most definitely rap, she’s always swayed towards the more poppy side of the genre. You could certainly call her the queen of commercial rap (which incidentally can be abbreviated to c-rap), but even this title is under threat. There’s a new contender for most popular female rapper named Cardi B and she’s got just as much skill, sass and sex appeal. Does Nicki prove on Queen that Cardi is no match for her? Or is there no chance of beating Nandos-flavoured hit ‘I Like It Like That’ (because let’s face it, it's a pretty awesome tune)?

I will admit this – Nicki has some hot bars on this new album. She’s sounding meaner than ever and there are points where she definitely out-raps the likes of Cardi B. Take Biggie-inspired ‘Barbie Dreams’ as an example, which may well be the best track of her career. It’s a hilarious diss-fest that name drops every male rapper in the game before tearing them apart (including Eminem and 6ix9ine who appear as guests on the very same album!). Not only are her attacks incredibly witty (I didn’t even clock the deeper meaning behind the DJ Khaled diss first time around!), she also dedicates the trapped-up back-end of the track to showing off her ability to flow at speed.

Meanwhile, on other tracks such as ‘LLC’, she directly confronts upcoming female rappers. Her energy is fierier than ever before, even if her bars don’t carry the same weight (the line ‘tryna make a new Nicki, where the factory? They’ll never toe-to-toe on a track with me’ might have been fire had Cardi B not already proved she can ‘toe-to-toe on track’ with Nicki on the track ‘Motorsports’).

Maybe if we’d got a whole album of this gritty and witty Nicki, I’d be willing to bow down to her as queen. But alas, these moments of majestic greatness are just glimpses.

Nicki spends a good chunk of this album chasing pop appeal. Too much pure rap could stop her scoring those Spotify streams – your average music fan doesn’t want mean bars, they want softly-crooned pop ballads such as ‘Run and Hide’. It’s these tracks where she loses me by pulling out the autotune and rapping about mistrust in a relationship in a bland Drake-esque tone. Other tracks meanwhile see her resorting to collaborations with Soundcloud rappers over bland Migos-style beats – 6ixnine delivers the most meaningless bars of 2018 on ‘FEFE’, whilst ‘Chun Swae’ offers a horribly sung hook from Swae Lee in his typically prepubescent style. Here, Nicki does little to distance herself from their level of quality, staying deliberately dumbed-down because she thinks this is what sells.

Admittedly, none of these songs reach Stupid-Hoe-levels of trash (although I doubt even Lil Yachty in a submarine could reach those lows). She’s largely abandoned her annoying Roman Zolanski voice and there are less deliberately obnoxious lyrics. For the most part, the songs are just dull attempts to appeal to the masses. The irony is that despite all her efforts, Travis Scott’s ASTROWORLD still beat her to the top of the charts – a still accessible yet much more alternative hip hop album. I guess sometimes it pays to experiment.
★★☆☆☆