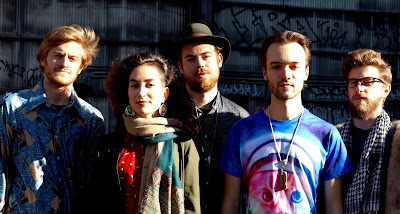 Their sound is an exciting nebula of various intergalactic instrumental layers from spacey synths to cosmic clarinets – in fact, they’re one of the few modern bands to use bass clarinet so prominently. Songs take a jazzy and proggy approach to structure, occasionally orbiting back around to a familiar melody but often drifting off to explore new chord arrangements and grooves. Vocalist Hattie Simon meanwhile delivers silky singing over the top, bringing the extra-terrestrial sound back to earth with a human touch (that’s probably enough space references for now).

The band’s new album Haven’t You Heard showcases their diversity. From groove-laden punchy opener ‘Don’t You Think You Wanna’ to slow cinematic closer ‘Reprise’, the record explores various moods and paces. The talent on display is top notch, but rather simply using their prowess to show off, they use it to craft rich melodies and sparkling atmosphere.


Max from Star The Moonlight was kind enough to invite me across the galaxy for an interview. Read below as I discuss the gritty stuff including pizza, sci-fi movies and favourite planets.

If Star The Moonlight was a pizza what toppings would it have?
You know, I hate to say it but I think we might be pineapple.  It really makes a strong gustatory statement and because of that, some people love it and some people hate it, but no one is neutral.  Art, I mean a pizza topping like that is more fun to me than one on which everyone is neutral.
Generic interview question - what are all your musical backgrounds and how did you all meet?
Andrew and I went to the Los Angeles County High School for the Arts and ended up moving to New York City together.  We’ve been roommates for a while.  He introduced me to Phil and James.  Believe it or not, Andrew actually met James because they both responded to a Craigslist add put out by our now dear friend Matt Anderson who was putting together his band at the time.  (His music is amazing btw, go check it out). Hattie and I were introduced by another (well really he’s THE other) NYC bass clarinetist and dear friend Jasper Dutz.  He actually gave me my first bass clarinet back in 2009.
Your new album Haven’t You Heard is incredible. I feel like I’ve just gone on an adventure across the cosmos. What was it like to compose and produce?
Wow, man, first of all, thank you so much.  That’s a HUGE compliment.  I feel like I was so innocent when I wrote all of this music.  These songs (aside from the reprise which is the most recently written composition by far) came from such a singular point of view and were all vehicles for processing and understanding pretty specific issues that I was dealing with when I wrote them.  Because of this, hearing them back now sometimes feels like they were written by someone else.
Anyhow, producing them was amazing, such a fun experience.  I learned so much, the band absolutely nailed the songs in recording, and our mix engineer Fernando Lodeiro made everything we played sound absolutely massive.
Clarinets don’t get the love they deserve. Who are some of your favourite clarinetists? What are some good clarinet bangers that people ought to give a listen to.
Well that’s definitely true in the case of bass clarinet. It’s such a got such a unique and beautiful sound that I think is edgy and nostalgic at the same time.
For good recordings of bass clarinet check out some classical and jazz music.  Tchaikovsky (The Nutcracker), Stravinsky (the Rite of Spring) and Shostakovich (Symphony #8 and many others) wrote some beautiful shit for bass clarinet and would occasionally write lead-ish melodies for it.  And for stuff in the Jazz lexicon I would recommend Herbie Hancock’s thrust.  Bennie Maupin played some beautiful bass clarinet all over that album.  That said, the absolute greatest bass clarinetist of all time IMO and my absolute favorite is Eric Dolphy, but his music is a little more difficult to digest.  Listening to recordings of him is THE reason I play that instrument.

I loved your epic music video for ‘Good Fight’. What was it like filming it? Did you enjoy falling into the water from space?
Thank you, huge shout out to the director Julia Barrett-Mitchell who came up with the amazing story and to the director of photography and editor James Rosser Berry who made each shot look so beautiful!  Filming it was a lot of work but also a lot of fun.  Woodworking is a hobby of mine and I actually built the spaceship set myself on the sidewalk outside my queens apt.  It took about two solid weeks.  Falling into the water was fun! I’m really just jumping off the edge of the rock island visible in the final shot.  Also that island was absolutely caked in bird shit.  We all had to shower immediately after getting those shots.
What are your favourite and least favourite sci-fi movies?
Oh man, great question.  Without a doubt, my favorite film of all time is Stanley Kubrick’s, “2001, a Space Odyssey.”  I love the music and the absolute gorgeousness of it all.  I’m also a huge fan of the original Star Wars trilogy, mostly for the art direction.  The world those ILM prop makers created was so convincing and they physically made pretty much everything that appears on screen.  That takes some real skill.
Least favorite would have to be Star Wars episode 7 and 8.  They reeked of a big money grab, and they felt derivative and did little to expand the Star Wars world for me.
What’s your favourite and least favourite planet in the solar system?
My favorite planet is Jupiter.  It is gorgeous and has some really interesting moons.  Saturn is a close second for the same reasons.  Least favorite is Mars, not much happens there….
I still hope that we send a crewed mission to Mars soon though but for goodness sake, let’s bring them back.  Those who wish to colonize Mars in the near future would likely, I fear, experience a profoundly exotic form of isolation.
What musical artists are you all listening to right now? Any underrated artists that you think people ought to know about?
I think in general our tastes are pretty eclectic.  We’re all big fans of Moonchild, Vulfpeck, Tierra Whack, Smino, Dirty Projectors, Madvillain, Margeret Glaspy, Young Fathers, and the list could go on and on.  As far as underrated artists go, Michael Mayo, Matthew Anderson, Harry Terrell, No Swoon, Sirintip, and saxophonist and composer Matt Chalk are all amazing.
Imagine you’re stranded on a desert planet and you have one album that you can bring with you and listen to – which album is it?
That’s a classic question that we’ve all thought about before. Phil’s would be D’angelo’s “Voodoo,” Andrew’s would be the Beau Arts trio playing Ravel’s piano trio in A minor, James’ would be Joao Gilberto’s “Live in Tokyo,” Hattie’s would be Stevie Wonder’s “Songs in the Key of Life,” and mine would be “Madvillainy.”  Would you have guessed they’d all be so different?
What does the future hold for Star The Moonlight?
We’ll have to see, maybe a UK tour ;).  I’m currently working on the music for our next album so hopefully that will be out in the next couple of years.  Also we’d love to open for Hiatus Kaiyote.   Who really knows, so much is possible.  I could get hit by a meteorite as you read this sentence.
Follow Star The Moonlight at https://www.facebook.com/starthemoonlight/