Review of 'thank u, next' by Ariana Grande 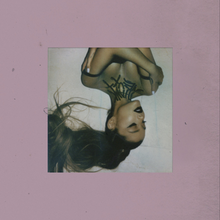 This is the second Ariana Grande album that I’ve genuinely enjoyed. What’s happening to me??? HELP ME!!!

I usually turn my nose up at pop albums. I’m a music snob and I’m proud of it. But now it seems I’ve turned to the dark side. I am now an Ariana Grande fan.

It was Sweetener, the singer’s last album, that converted me to Ariana-ism (not to be confused with Arianism or indeed Aryanism). The album was brimming with positivity that I found to be undeniably inspiring considering the amount of personal tragedy Ariana had been through. But it wasn’t just her positive mindset that won me over – as much as I wanted to resist, I found myself actually enjoying her music. The singer’s playful vocal harmonies and the bubbly beats mostly courtesy of Pharrell Williams made the album feel a lot more fun than your average pop fodder. Pretty soon I was singing along to all the hooks and then soon after I was plastering my home with Ariana Grande posters and now I have a shrine built to her which I pray to five times a day…

But anyway, I didn’t expect to enjoy another album. And yet here we are with this new record. It’s been barely half a year since Sweetener and the personal tragedy has continued to rain on Ariana Grande like a monsoon, having suffered another break up and had to deal with the death of her ex Mac Miller. The ex-Disney star has finally decided to stop playing cute on Thank U, Next and she’s now singing hooks like ‘fuck a fake smile’ and ‘break up with your girlfriend, I’m bored’. But even though she’s lost the endearing sweetness she displayed on Sweetener, her newfound salty attitude feels like it’s justified given all the shit she’s been through. It’s the type of good-girl-turned bad attitude that Taylor Swift wishes she could pull off.

All in all, it feels like she’s veering more towards the strong-independent-woman vibe that Beyoncé is the queen of. The only difference is that she’s got less arrogance than Bey – she allows her fragility to still show on tracks like ‘Needy’ and ‘In My Head’, which I think makes her music more relatable. She also doesn’t rely too hard on annoying vocal acrobatics like Beyoncé, despite having the vocal talent to match her, plus her production choices are more creative than Beyoncé’s (come at me Bey fans!).

Personally, I thought I wouldn’t enjoy this album as much as Sweetener because of the absence of Pharrell Williams on production. But the beatsmiths hired on this album do just as much of an astounding job at bringing out the best of Ariana’s voice. The lone ethereal keys and lack of percussion on ‘Needy’ really help to bring out the longing in Ariana’s voice, whilst the haunting synth swells of ‘Ghostin’ really pair well with her breathy vulnerable vocals as she confronts trying to seek new relationships whilst unable to forget the ghosts of her past.

There are some tracks here that I’m not so keen on. ‘7 Rings’ sees Ariana Grande bragging about how much money she has, which has to be my least favourite mode of lyricism. Meanwhile, ‘Bad Idea’ leans a little too hard toward the commercial sound I try to avoid with its basic lyrical concept and plucked guitars.

However, other than these couple tracks, this feels like a genuinely personal and sophisticated pop album. It may well not be as bubbly or as musically adventurous as ‘Sweetener’, but there’s also more conviction in her lyrics and her voice. I’m hoping the personal tragedy is all behind her now, but I’m also hoping she continues to create music of a similar calibre and that other pop artists can follow her lead.
★★★★☆