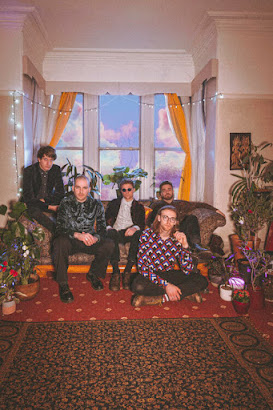 They’re a rock band from Leeds with a seriously infectious guitar sound (so infectious that you better get that face mask on!).

You Said It is the name of their latest album and showcases the full breadth of their sound. There are suspenseful songs like the title track ‘You Said It’ that gradually build up to a crescendo. There are explosive tracks like opener ‘Same Mistake Twice’ that remain hi-octane throughout. There are jammy sprawling tracks like closer ‘Against All Odds’ that ebb and flow for eight minutes. Oh, and then there’s even a spooky synth instrumental titled ‘Murmur’ thrown into the mix. You can stream the album below on Spotify.

Eager to find out more about the band, I decided to reach out to them with a Q and A. Here are the results…

If KOYO was a pizza what toppings would it have?

We’d have all the toppings because we like to mix things up a bit and keep people on their toes, testing people’s tastebuds.

I’m loving your new album! How did writing and recording it compare to your last album? What was it like working with Mike Horner?

Thanks! Glad you’re enjoying it. It was a totally different experience. The first was done in the middle of nowhere in the beautiful Welsh countryside, surrounded by rolling hills, sheep and magic mushrooms. The new one was done in Leeds, so we’d drive in from home each day, and it was generally much more intensive. We recorded 9-5, rather than basically from and until whenever we felt like. And I think you can hear that!

Working with Mike was a dream. He came up to Leeds for the first few days, and then mixed it. You could tell he’s made a lot of records. He really helped us trim our ideas down, and taught us a lot about editing and arranging. That less is more approach definitely partly came from his influence. He certainly helped us achieve it.

Title track ‘You Said It’ is a banger. It has such a fun build-up and the lyrics are really relatable to anyone who’s been in a rocky relationship. How personal are the lyrics? And I have to ask it – was the groove influenced by the breakdown in Slipknot’s ‘Duality’?

Haha, we’ve been asked that loads of times! Consciously no, but subconsciously I’d have to say probably! I used to rinse Vol. 3 as a teenager so it’s probably found it’s way into my writing that way. The lyrics are pretty personal across the whole album, and especially in this tune. It’s about the breakdown of trust in a relationship, written in real time, and how when certain things have been said it can be almost impossible to make a comeback, no matter how many times you try.

What’s happening in the video for ‘Out of Control’?

Our friend Razz has been doing these lyric videos for us and that was totally his interpretation of the lyrics being about getting itchy feet and wanting to go somewhere! He read it as literally wanting and trying to get off this planet. We loved it!

What’s lockdown in Leeds been like? How has the pandemic affected the band?

It’s been up and down. I think it was easier when we were right in the thick of it, because at least we knew where we stood. And there was something quite peaceful and surreal about walking around the city with no cars anywhere, but now it’s probably harder. It’s more confusing being in this middle ground, and still not being able to play gigs obviously sucks. But hey, obviously we can’t complain, it’s all heading in the right direction. And other people have it much, much harder. What we are doing is writing again and recording a live session next week too. So it’s not all bad for us.

I’ve heard great things about your live performances. What’s the funniest/weirdest thing that’s ever happened during a gig?

That’s good to know. Probably the funniest thing would be me forgetting to bring my guitar to play Leeds fest and not realising until we were about to soundcheck. Our stage manager had to drive back to Leeds, and managed to get back 2 minutes before stage time. I literally grabbed it out his hands and ran on stage. Then I broke a string halfway through anyway and had to borrow someone else’s guitar to finish the set!

You’ve previously named Tame Impala and Unknown Mortal Orchestra as influences. What’s your favourite song from each artist? You can only name one!

What music have you guys been listening to recently? Anything that fans wouldn’t expect?

And actually a bit of Dua Lipa - Future Nostalgia :P

That’s an insanely hard question! Possibly Currents? But then again possibly not?

What does the future hold for KOYO?

We’re doing a live session for BBC Introducing next week, playing a load of songs off the new album and recording/filming it at Hohm studios in Leeds. So keep an eye out for that. Then later this year we’re planning to release some tracks we recorded late last year with legendary Strokes producer Gordon Raphael. That was a fun time! And then, hopefully back to gigs next year and more releases! We’ll see!