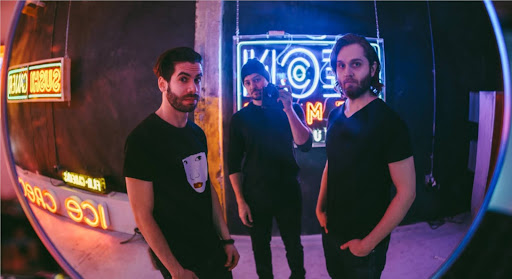 They’re uniqueness lies in their talent for sound design - they’re able to take guitar and synth sounds and knead them into shape like, well, dough. Rather than taking this talent to produce happy experimental tunes, they’ve chosen it to explore the darker side of music (let’s face it, darker is better). It’s lugubrious music that fans of Radiohead or Aphex Twin are likely to appreciate.

Mad Liquid Space is their latest gloomy and cinematic album. It opens with slow-building hypnotic instrumental ‘Who Is The Dreamer?’ (which I featured a couple weeks ago in my tracks of the week), before delivering an eclectic mix of tracks from the dreamy and jittery ‘Beat Minor’ to the eerie and atmospheric ‘Loop’ to the groovy and sprawling 10 minute closing title track ‘Mad Liquid Space’. You can stream it below:

I took the time to interview the band, quizzing them about beer, coffee and horses. Oh, and I also talked to them about their music. You can read the interview with Aaron and Andrew below…

I love the flow of each track on Mad Liquid Space. How did you go about composing these songs? Was it a case of jamming ideas and letting them build naturally or did you have a clear idea of the start and finish before each song?

Aaron: Each track on the album has a different origin and process. Typically, one of us will create a demo but from there it becomes more collaborative and more production oriented. A lot of songs saw significant structural and arrangement changes over many iterations. Bones is the oldest track on there and was originally meant to be on our first EP Tare. I’m glad we didn’t release it then, because it wasn’t ready and I’m proud of how it transformed over the years to the final version. Conversely, ‘Who Is The Dreamer’ was the newest track and only took a couple of months to complete.

What’s the trick to making guitars sound like synths? And do guitars feature on every track on this album (‘Who Is The Dreamer?’ sounds like it’s all synths)?

Aaron: A whole slew of pedals for starters. The Line6 DL4 is a big part of my guitar sound, it has reverse and auto volume settings that create a synth pad-like sound. Then all of those recordings get processed a whole lot more using various plugins in Ableton. Reverbs and delays are key to the washy, ambient soundscapes that appear throughout the album.

What’s the wildest/funniest thing that has ever happened at a gig?

Andrew: The power went out 10 times during our sets AND we secretly served mushroom tea to everyone in the crowd.

How have you guys been coping during the pandemic? Has it had a major impact on your band?

Andrew: We can’t really jam, but we’ve been writing like crazy. At one point we were thinking, “okay, let’s separate some packages to release here.” That lasted a week and now I think we’re back to just exploding demos. I think we’re loving just writing a lot, practising piano, and building new live setups. For me, the goal is really to build an improv station that involves performing on instruments as well as some more DJ controls.

Beer or coffee? If you had to give up one, which would it be?

Andrew: Jesus Christ! Neither. But coffee. But fuck. Neither.

Aaron: This question makes me uncomfortable.

In your Facebook band interests you list ‘horses’. Do any of you own any horses and, if so, are they fans of your music?

Andrew: I just went on Facebook to check that out and totally forgot what I was doing. Which horses?

Doughnuts, Churros, Funnel Cake or Beaver Tails? Which is the best type of fried dough?

Andrew: Donuts! Although the name comes from a beaver tail that blew my mind when I was 17. I should mention I was insanely high.

Who are some of your favourite local Toronto artists right now? Any lesser known artists that you think the world needs to know about?

I recently heard Fermi Lekunde. Was very impressed and didn’t expect that IDM sound to come from Toronto.

What does the future hold for Fried Dough?

Aaron: In the near future we’ll hopefully get some more music out there, we’ve been really productive in the studio and there’s a whole batch of new songs that we’re excited to share. And once the world allows it, we’ll be back playing live.