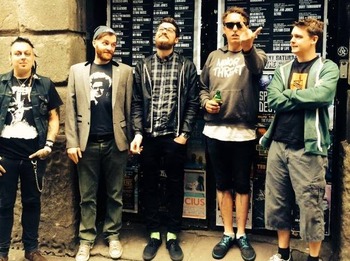 They’re a loopy five-piece rock group terrorising the south of England with their deranged sound.
Citing a diverse array of influences including The Jesus Lizard, Nick Cave, Mogwai and At the Drive-In, the band’s unique style is a Frankenstein’s monster of hardcore punk riffs, proggy disorientating time signatures and theatrical erratic vocals.

You can hear it all for yourself below on Bandcamp.

Eager to try and understand the group more, to unlock the riddle behind ‘Hairdryer Blues’ and the wacky band name, I interviewed lead singer Tom, the result of which you can read below…

If The Harry Macintosh Project was a pizza what toppings would it have?

T (Tom): Tough question but if we were to create toppings out of our influences, the pizza would consist of a healthy dose of punk peppers, some prog sausage, a dash of post rock hot sauce and, oh I dunno, noise cheese.

Who is Harry Macintosh?

T: Harry Macintosh is a completely made up name. I looked it up shortly after the band formed and I vaguely remember the top result on Google being the website for some amateur scientist in California or something.

Your new EP is nuts! Who did the artwork? What’s the creepy jellyfish creature?

T: Glad you like the new EP and thanks for the kind comments! The artwork is by a guy who simply calls himself 'Beeple'. Check out his Facebook page, he's pretty awesome.

T: Our bassist Thom wrote the lyrics to Hair Dryer Blues. I'd like to think it's about a crippling fear of losing your hair but don't think he'd appreciate me saying that so we'll just leave it there.

What music are you guys listening to right now? Anything fans wouldn’t expect?

T: The five of us have such diverse music tastes that we're always listening to weird and wonderful things. I think Thom (bassist) and Dave (guitarist) have been listening to the new Dillinger Escape Plan album a lot recently. I've been fluctuating between alternative 90's stuff I liked as a kid and newer bands like Wand and Bearded Youth Quest. I can't speak for Jack (vocals) and Griff (drums) but they both have a good ear so I'm sure it's great whatever it is!

T: Personally, my favourite Mars Volta album has got to be De-Loused in the Comatorium. That album absolutely blew me away when I first heard it and I don't think they ever really topped it. I'm pretty confident the rest of the guys would agree with that.

My personal fave too! What are Harry Macintosh Project gigs like? Funniest gig story?

T: Our gigs are generally pretty high-energy and quite unpredictable. We played in London on Saturday and for some reason I felt the need to throw my £1,100 Fender Strat across the stage at the end of our set. I still haven't checked to see if I've actually damaged it. So yeah, our gigs can be pretty spontaneous. We often wear ridiculous costumes and make up, and our vocalist Jack has frequently "bared all" as it were ;) Anything can happen depending on how we feel at that moment.

What’s going on in your music video for ‘Mouldy Water’? Is shoving cucumbers through people’s letterboxes a pastime of yours? And have you attempted any other vegetables?

T: Believe it or not, the video for Mouldy Water is inspired by actual events from my childhood. When I was about 12, I got into a huge argument with my step-dad so my idea of revenge was to run around to the local shop, buy a cucumber, run back to my house and squeeze it through the letterbox making a horrible mess. I don't know what I was thinking, looking back I can see how weird that was. We added the mask just for the video, for no reason.

What does the future hold for The Harry Macintosh Project?

T: At the moment, because we all have jobs etc, we don't plan too far ahead so take each month as it comes. Our last show of the year will be on November 18th at the Chelsea Inn, Bristol. This will also be our final show with Griff on drums, however Will Brunsden (formerly of Oblivionized) will be joining us for some dates in January. We're hoping to do another music video and tour the UK next Spring but nothing is set in stone at the moment.