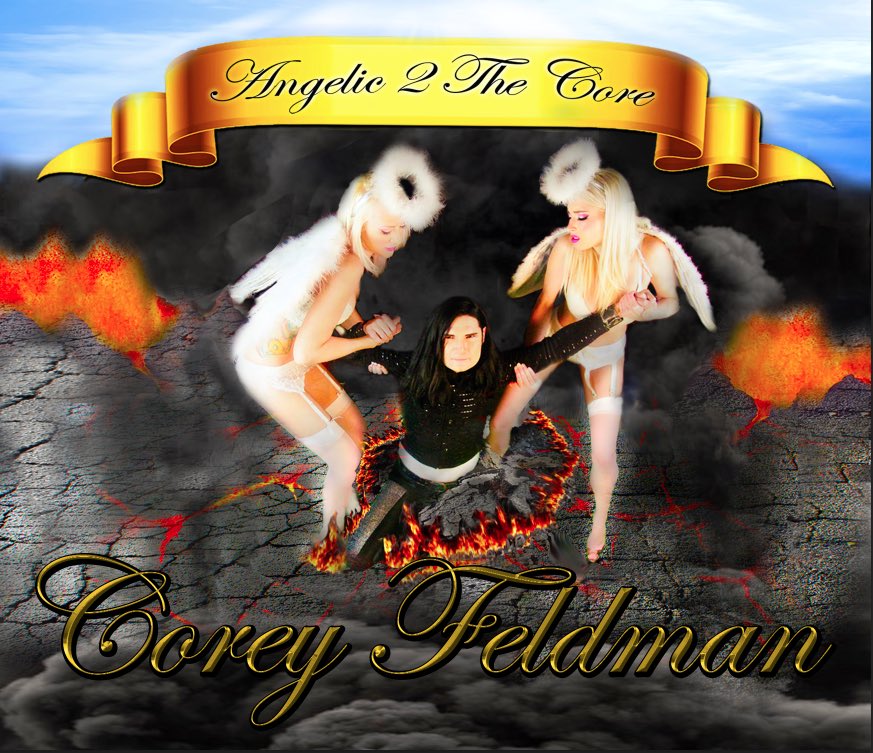 How did we allow this to happen? No, I don't mean Brexit or Trump or even the new Toblerone. I’m talking about 2016’s biggest atrocity - Corey Feldman’s new album.

We’ve been here before, only last year. A former child-actor-turned-musician, blinded by childhood fame and the belief that they can achieve anything, attempted to create a 90-minute genre-meddling album that amounted to 90 minutes of audial torture. That artist was Miley Cyrus.

‘We be like Miley Cyrus twerking/ you can’t help but watch it’ raps guest star Fred Durst on the 12th track of this new double album from Goonies star Corey Feldman.

Even Fred Durst has noted the comparison. The irony is that Miley Cyrus, as low as she has stooped before, would never lower herself to make an album with Fred Durst on it. Another striking difference – Miley isn’t 45 years old. She has the excuse of youth’s naivety to fall back on. And whilst she’s no Whitney Houston, she can hold a note in tune.

Corey Feldman exists in a separate circle of Hell, one much deeper and more unforgiving. His new album couldn’t be more terrible if it tried. In fact, some of it is so bad that’s its borderline impressive. Take Corey’s singing on EDM party anthem ‘Lovin’ Lies’, so out-of-key that the Auto-tune can’t even hold it together, so out-of-time with the beat you can’t even tell what rhythm he’s trying to achieve. There’s messy dance-funk Kurupt feature ‘Lickety Splickety’, in which Corey’s angry vocals could pass off as a Muppet impersonating Michael Jackson were that the intention. And no review could be complete without mentioning random jazz number ‘We Wanted Change’ in which Corey sounds like a constipated Rod Stewart during the hook, so laughably harsh on the ears I genuinely pulled a muscle in my stomach.

And that’s just the vocal flaws. Instrumentally every criminal idea seems to be pulled out the woodwork too, from gaudy synth leads to cheesy 70s-porno-style funk to cheap nu metal riffs, all so poorly mixed on top of one another you can barely tell what’s going on half the time.

With Corey handling everything from the lyrics to the instruments, I’d like to think no-one else was given a look in during the ten year creation process of this album (that’s right, this shit took a decade to make!), otherwise surely someone would have intervened. However, as is evident from it’s credits including the likes of Snoop Doog and Scott Page and B Howard, other people clearly were around during the creative process of this album. They must have heard some playbacks. Why did nobody say anything to Corey? Why did Kaya Jones not step in during ‘4 Bid In Attraction’ and say ‘Corey, hun, I know you’re trying to sound sexy, but you sound like Freddy Krueger. Maybe you could lay off the rasp a bit’.

Everyone just sat back and let this abomination happen. They withheld the truth from Corey, which is as good as lying. Isn’t that Corey’s number one principle – that he hates liars? Isn’t that the lyrical premises of ‘Bad People’: ‘They’re evil/ deceitful’. Isn’t that the lyrical premises of most of these songs. And yet these bastards still didn't have the courtesy to Corey the truth - that he doesn't have an iota of musical talent - making him believe these songs were actually listenable. They smiled and laughed and nodded supportively as he played back recordings of himself wailing over electronica that wouldn't have even been cool in 1999. Was it all a joke to them – a laugh at Corey’s expense?

Or maybe I've got it all wrong? Maybe they did tell Corey the truth about how dreadful he is, but The Lost Boys actor simply didn’t believe them? Maybe this isn’t the fault of everyone else - Corey is just in denial of how bad he is, passing everyone off who criticises his music as liars, when really he’s lying to himself!

I can’t bring myself to analyse this album any deeper, because  - quite frankly – it doesn’t deserve it. I need to remind myself of what good music sounds like again; I’ve spent too long with this record. Listen to something else, quick! Anything is more beautiful than this.
★☆☆☆☆