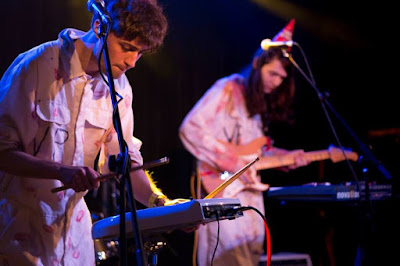 They’re a wacky indie rock duo from Manchester, regularly known to perform live shows in boiler suits and make-up, musically influenced by the likes of Everything Everything, Animal Collective and tUnE-yArDs. According to their press release, they write ‘sci fi ballads about the mechanization of labour and quiet hymns about failed interventionism’.

From songs about apples and anti-Semites to songs about coming out as transgender, most of the EP seems to centre around the duo’s arrival at adulthood and the realisation that it is all rather confusing and shit. But instead of being a bunch a whiny millennial musings, their insights come across charming due to the humour and eccentricity that the pair are able to pour into their music. Perhaps one of my favourite songs is ‘Body Bag pt.1’, in which Flora seems to lose it at the end lamenting ‘If only I could spell my name!’, following an eerie detuned synth kind of similar to the THX sound effect in reverse.

Given the chance to interview the band, I decided to get into the duo's psyche and better understand the minds behind the madness. We hooked up and dined on cake, pizza and Brexit and here is the result…

If The Vanity Project was a pizza what toppings would it have?
Flora: It would be covered in chocolate sherbertglobes, roseberry fizztwizzlers and everlasting gobstoppers. But as you bit into it you’d find the juicy sweet tomato puree was actually HUMAN BLOOD.
Your new EP is the dog’s bollocks. For a duo, you guys play with a lot of exciting instruments. Who plays which instruments?
Rob: Thank you! We each play a bit of everything, except Flora can't drum for shit and my keyboard skills are non-existent. A lot of the weirder sounds come from an Ultranova Novation synthesiser and a Roland Handsonic 10 drum pad. While it’s difficult to get synthesised drums to sound right, it does allow you to put timpanis and santoors on an indie rock record.
I quite like the line ‘we all become tories in the end’ in Graduation Blues. Would you consider yourself political lefties? Is this a social comment on the fact that the older generations seem to have all turned right wing (it would certainly seem that way from the demographics that voted for Brexit and Trump)?
Rob: Yeah, we would call ourselves lefties, but when we explore political issues in our songs, we don't tend to push a particular agenda explicitly. That's mostly cos we don't have any answers, we're just acutely aware that everything is going to shit. That lyric comes from a particular experience I had when a woman asked if I’d voted Labour. When I said yes, she responded 'of course you did, that's because you're young.’ Truthfully, I have become less left wing as I've gotten older – I was an anarchist for a bit during my teens. The whole song is about the death of idealism: politically, and the idealistic dreams you hold for your own life *cough, like trying to make your indie band work, cough*. Idealism is all well and good when you're young and looked after by your parents, but when you’re older and have bills to worry about, you do get a bit more money driven. I worry that socialism is a luxury for the middle classes and I think Brexit and Trump have shown that.
I watched your music video for Graduation Blues. I’m sorry no-one came to your B-day bash. Did you enjoy your cake?
Flora: The cake was, in a word, dogshite. It was dry and the icing tasted of doorknobs. When I ripped it apart in my hands it was pure catharsis, not just on account of the bad experience I had had with that cake, but as a purging, a violent cleansing, of the trauma incurred from all food that appears precious yet tastes of despair. I asked Rob if we could get Sainsbury's Finest but by that point he'd spent all the budget on disco lights that DIDN'T EVEN MAKE THE FINAL CUT.

You have red stuff on your boiler suits. What happened? When are you going to put them in the wash?
Rob: We had one of our pizzas.
What music have you guys been listening to recently?
Flora: The extent to which I've only been listening to PC Music for the past month is unhealthy. I'm only just now coming out of the phase with a lovely EP from serpentwithfeet called Blisters, very soulful, quite Antony and the Johnsons. Best album of the year was The Colour In Anything by James Blake, and for once me and Rob are agreed on it!
Rob: In terms of when we were making the EP, we were rinsing XTC's Skylarking and Hjaltalin's Terminal. Both records are orchestral and grand but have a ton of unexpected sonic flourishes, which I think you can see reflected in the EP.

Jonathan Higgs of Everything Everything likes your music. Have you met him personally?
Flora: Strap in Alisdair this next part's a rollercoaster. There's a lyric on Fortune 500 that's a bit of a riddle. If you check its Genius page it's been annotated by the band with some cryptic comments. I posted about it on Reddit, then started receiving a lot of strange anonymous messages there that were even more puzzling. I eventually put two and two together after he tweeted the words ‘grotto fail’ at us… keen readers will note that it’s an anagram of “Flora got it”. We happened to be playing a festival they were headlining around that time, so I sent back a coded message that they should come see us. And they did. I won’t say what the answer to the riddle was.
What are live shows like? I understand there’s lots of loop pedal
Rob: The loop pedal is something of a necessity, as there’s only two of us, so we loop various sections to get a full band sound. We don’t like to think of ourselves as loop artists though, I feel like the stereotype there is layering various affected guitar riffs on top of one another and mumbling into a mic. Our shows are pretty manic – lots of swapping instruments, running around and hitting things. At the moment they’re birthday party themed to go along with the EP. We bring party poppers, balloons and, very often, cake.
Flora: I guess you’ll have to come to one of our shows (George Tavern, London 10th Jan; Zombie Shack  Manchester, 24th Jan) to find out!
Rob: …or you can watch a video of it here:

But come to the shows as well. Please.

What does the future hold for The Vanity Project? Any New Year’s resolutions?


Rob: We’re planning to play as many gigs as we can, particularly in Manchester and London. We have two more singles planned for release this year… let’s just say Trump and Brexit are a recurring theme.