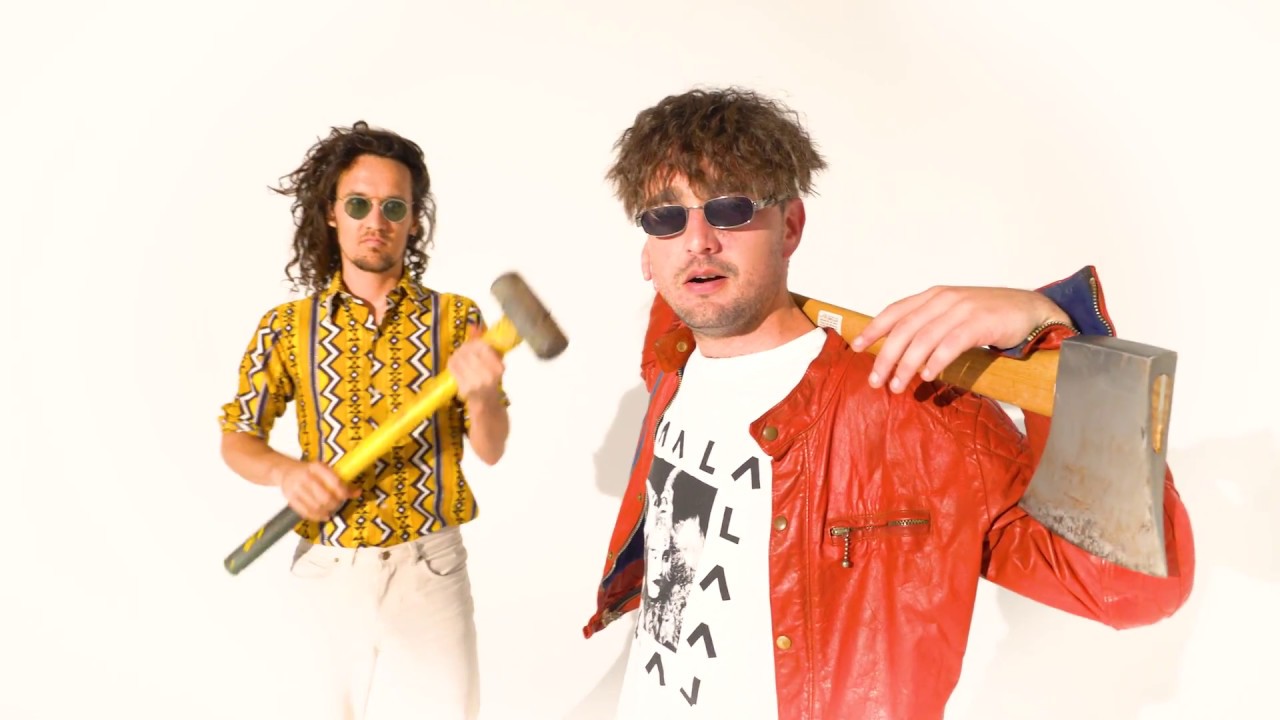 They self-describe their sound as ‘Beats made on the fly. Totally improvised. Recorded straight to cassette 4-track. Beats take as long to make as they do to listen to.’ Their latest album Mick’s Nuts is a 57 track long tape containing these very beats, comprising of songs titles such as ‘Harold Holt and The Killer Babes From Atlantis’ and ‘Menu Screen For Some Really Dark Game’. You can feast your ears on the album below.


More recently they released ‘1st World Problems Solved’, an actual full-length song of sorts that I praised on this blog for its sexy groove and relatable lyrics: ‘If I see another pussy I’m gonna be sick’. Made on the fly or not - the band's beats are undeniably inventive, made all the more entertaining by their uniquely hilarious personality.

Eager to get to know the band more, I decided to take an hour out of my day and swim over to Brisbane from the UK to interview the trio. Read on for some serious chat involving rival tape gangs of Brisbane, pizzas with faces and liaising with BADBADNOTGOOD and Hiatus Kaiyote...

If Vulture St. Tape Gang was a pizza what toppings would it have?

Lots of meat. Anything with a face. Actually all the faces. Made into cubes so that there's extra faces.

I recently listened to Mick’s Nuts and it was so good I had a seizure. What made you choose to record beats on cassette tapes?

Thank you and apologies for the seizure. To be completely honest with you, we didn't use tape for that mix tape. But we did release it on tapes coz we are hipsters and tapes are cool. We used to record on a tascam 4 track but not anymore. We're making high quality pop hits now.

Your latest sexy single ‘1st World Problems Solved’ seems a little different from previous material. I mean, like, it’s an actual song. Do you have more singles like this planned? Or strictly beats?


Tell me about your individual origins. One of you was a local baroque/classical pianist, right?

The voodoo shaman, our synth lord, was forced to play baroque music for dinner guests by his angry master when he was a small child. His master had many guest that would stay for weeks at a time and he'd be forced to play Bach til his tiny finger tips swelled up to the size of larger finger tips.

I am a dumb ass that gets drunk and rambles about unrequited love and pineal glands and the anunnaki and whatever.

Who are your musical influences?

Well me personally, hi, mchypeman here, I don't really like music. I'm more of a sports kind of guy. I guess my main musical inspirations are the music on beer ads and sports shows but definitely subconsciously.

You’ve previously supported Hiatus Kaiyote and BADBADNOTGOOD. Did you get to talk to the members backstage?

I wasn't at the bad bad not good show coz I'm expendable and I live in Melbourne but I got to meet them in Melbourne, lovely fellows.

As for hiatus, they were way too snobby to talk to us and I think they were all high on meth. JOKES. We are all very tight, in fact the bass player bender is co-producing our next release.

Are there any other rival tape gangs in Brisbane?

There's the Wickham tce mp3 boys and the Stafford Rd minidisc mob but not other tape gangs. But we have been rolled by both of the aforementioned gangs.

I found this video and it confused me slightly. Care to explain?

That's a little teaser for our mix tape "hung phat jewellery" made by our mate Kirkis who is a deadset legend.

What does the future hold for Vulture St. Tape Gang?

The next EP and then after that probably full blown radio length hits. Then all the gobbies.