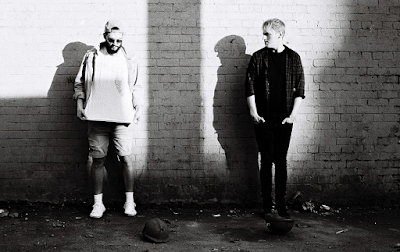 I take the time to talk to Mancunian experimental rock band Pool Art about fidget spinners, nuclear war and their new ethereal EP.

Titled Chamber Piece, Pool Art’s new EP certainly seems fit for a torture chamber. Its 5 songs are drowned in reverb and distorted in all kinds of ghastly effects. The result is music so dark you can barely make out the hand in front of you. The mixture of melodic vocals and dissonant guitars show clear elements of doom metal and shoegaze, but whilst such genres tend to be long and meandering when it comes to song-writing, Pool Art’s songs feel very succinct and even punky as is certainly the case with ‘It’s A Hatewatch’.


The result is a rock sound that’s fresh. And yet the duo still manage to find an equilibrium between having a distinct sound but still making each song diverse enough from the next. Opener ‘Misery Porn’ is comparatively upbeat and groovy, whilst ‘It’s a Hatewatch’ and ‘Died Off Screen’ are more frantic pieces made up of harsh squeals and clangs (with the exception of the latter track’s rhythmic outro). Closing dirges ‘Gender Balance’ and ‘Don’t Feed Me To Them’ meanwhile explore the band’s slower and more ambient side, both landing up in the chasms of Hell as they devolve into noisiness. The swamp of reverb makes it hard to distinguish most of the lyrics, but from the track titles alone you can sense that it’s gloomy and agitated stuff.

If Pool Art was a pizza what toppings would it have?

It'd probably have like a Marmite base with some other polarising food as a topping, maybe something unusual like 90% cocoa dark chocolate.

You guys have a sound that’s hard to pin down. I hear glimmers of everything from shoegaze to doom metal to grunge to ambient in your sound. Is it safe to say you have a lot of influences?

Yeh, I think most interesting artists do. We like listening to lots of new things and discovering old things and I think we do make a conscious effort to combine music that excites us in an obvious way, we wear our influences on our sleeves. I think our stuff is interesting because it's varied and these elements we bring together, although on paper they may clash, actually can work interestingly together on some level.

What’s the creative process behind these nightmarish guitar sounds? Do you spend lots of time playing around with effects and pedals until something sticks? Are there tapes of other experimental recordings?

I do tinker with pedals a lot, but I don't have a big selection of them and I like creating within that limitation. It's really great when you start to re-use an unusual sound or combination of effects across your writing, as it ends up being a thread that ties things together. I do make slightly less accessible stuff with my other project Of The Antarktik, which is a solo venture. I'm not sure how "experimental" anything that we're doing is as I think the term has adopted quite a different meaning for music in recent history, I feel the people who make the pedals that I use are the experimental ones.


You guys have recorded music in art galleries and warehouses. What’s an unusual location that you’d love to record music in?

Buildings that have a story are cool because it feels like you absorb some of the history of that space in the recording. There's a video of a girl singing down a well that's been doing the rounds online and I was really impressed by the reverb that this well produces, I think it was recorded on a phone too, so unexpected places would be most exciting. I remember hearing this weird almost robotic slap delay in my stairwell and trying for a while to capture that without much success.

Can we expect any music videos one day? I’d love to see these sounds visually complemented.

We have a video for 'It's A Hatewatch' coming very soon, it was made by the exceptionally talented Will Shields, who has also snapped some amazing photos for us. He has a great eye and wanted to do a one take video in a dark and creepy location, it turned out great. He loves black and white too. It's quite a subtle video, which is an interesting marriage with what is a very unsubtle song. Hatewatch is the song that has had the worst response from people so it made sense for us to focus on that and really force it down people's throats.

What music are you listening to right now? Anything fans wouldn’t expect

So much, it's too easy to find amazing music these days, which arguably sours the reward a touch. In terms of unexpected stuff though maybe 'clipping.' is the one that stands out. I remember a friend of Lee mentioning them some time ago and months later I stumbled on this KEXP session they did and they are all so talented. I really love Wriggle and their latest Splendor & Misery is something very special. Definitely watch that KEXP performance.

If Pool Art owned a swimming pool what would it be like?

Probably filled with blood that moved gently and in slow motion. A pool designed by David Lynch!

When are Pool Art fidget spinners hitting the shelves?

Still trying to shift T-Shirts so they're probably a way off. I did see a Simon The Magpie, who makes pedals, using one in a pretty interesting way recently though.


Who will win in the imminent nuclear war – Kim Jon Un, Trump or Pool Art?

If it happens, no-one. I hope it never happens.

What else does the future hold for Pool Art?


I'm genuinely excited about what comes next, I've truly enjoyed everything that's happened so far and can't wait to share more music and get in front of more audiences. We're going to take a little break after Chamber Piece though, but we'll be back soon.