Review of 'Uknowwhatimsayin¿' by Danny Brown 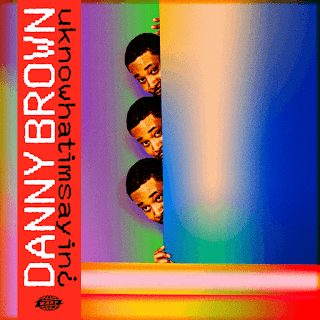 
The gap-toothed squawky-voiced party god has recently decided to clean up his image. He’s tidied up his hair, smartened up his wardrobe and he’s even got rid of the iconic gap in his teeth.

Danny is clearly on the mend, which is great to see after his last album Atrocity Exhibition, which sounded like a drug-addled mental breakdown on tape. At the same time, I did worry that this attempt to clean himself up might make his music less exciting – as much as Atrocity Exhibition did have me concerned about Danny’s mental health, it was a phenomenal album with fascinatingly bizarre production and some of Danny’s most hi-octane vocals.

Uknowwhatimsayin¿ definitely isn’t as wild. The beats aren’t as experimental and Danny has tamed his squawk to a more Andre-3000-esque bray. However, it is still a fun album, largely due to Danny’s lyrics which are loaded with disses and punchlines. He’s taken on a meaner and yet equally funnier persona, teaming up with veteran trash-talkers Run-the-Jewels on ‘3 Tearz’ for an ode to apathy and throwing out witty jabs like ‘want beef? You’re gonna fuck around and end up a vegetable’ on ‘Combat’. There’s not much personal lyricism, but there are moments when it seems like he’s confronting his past self. ‘Dirty Laundry’ for instance could be interpreted as a tale of the person he could have become – a lowlife doing anything he can for drugs and sex.

A number of hi-profile guests help to craft the beats and offer vocals. The production may not be as left-field as on his last record, but there are still some raw and inventive instrumentals here courtesy of the likes of Q-Tip and JPEGMAFIA (the chopped-up horns of ‘Combat’ and proggy Rush-like guitar of ‘Negro Spiritual’ are my favourite beats on the record). Some of the vocal features are slightly disappointing – Nigerian-British singer Obongjayar has a cool accent but his two performances feel slightly shaky, and Blood Orange’s singing on ‘Shine’ is completely off-key.

Danny may have been trying to keep the vocals raw to match the beats. Personally, I don’t mind the beats sounding rough-around-the-edges, but I prefer vocals to have a little more polish (they sound like they were recorded in one take).

Uknowwhatimsayin¿ may be tame compared to its predecessor, but it’s far from boring. Despite seemingly sobering up, Danny hasn’t lost his sense of fun and his bars have only gotten wittier. Where will this new clean and mean Danny Brown take us next¿
★★★★☆