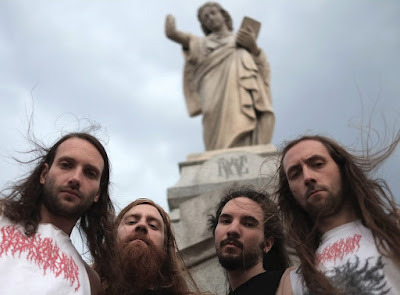 This week features touching piano ballads and psychedelic death metal. I’ll let you figure out which one of those is the new Coldplay track and which one is the new Blood Incantation track.

This is my first time listening to Febueder. Their band name is a completely made-up word (according to their Facebook bio) and their sound is equally undefinable. The closest comparison I can come up with is Foals frontman Yannis Phillipakis jumping on a Bjork instrumental. It’s a dense maze of xylophones, horns and synth swells in which the vocals are half-buried. There’s little discernible rhythm until the last thirty seconds of the song, and yet there’s enough of a melodic through line to keep you hooked until the end.

‘Thinking of myself’ – Cloud Tangle

I’ve interviewed Cloud Tangle before on this blog. The Brisbane solo artist’s latest song sees her gratefully continuing to push forward her melancholy sound. The production is a little cleaner, but her sighed-out vocals are still just as clawingly despondent while the instrumentation is still as creative, containing some gloomy synths and a stumbling drum beat. This is the first single off of Cloud Tangles upcoming debut album.

This new single from Seattle band Night Hikes combines shoegazey guitars with soothing melodic vocals. It kind of reminds me of Fleetwood Mac’s ‘Dreams’ - but, well, dreamier. Part of me almost wishes it evolved a little more, but there’s also something hypnotic about how the strummed chords don’t let up.

I’m a little late discovering this one, but it’s still worth sharing for all those metalheads like me that haven’t been fortunate enough to experience what might be the best metal track of the year. The single is largely an instrumental (there’s a lone growl at the end, but otherwise it’s an instrumental) and it slowly transitions from time-stretched cinematic ambience to prog rock to full out death metal. All the while, the video takes the listener on a trippy journey through space before drowning the viewer in blood. The talent that has gone into the production and composition of this track is incredible. To steal a comment I read on the Youtube video, it makes ‘Tool look like Smash Mouth’. The band have a new album out that I’ll definitely be checking out over the weekend.

Coldplay have released a fair amount of dross over the last decade, but what I’ve heard of their recent album has been surprisingly decent (I really enjoyed ‘Arabesque’). ‘Daddy’ turns out to be a piano ballad about an estranged dad. It’s surprisingly tender and is accompanied by a beautiful animated video. The celeste at the end momentarily makes it sound a bit like Christmas ad music, but otherwise it’s very intimate.

If Coldplay’s new music is too adventurous for you, don’t worry – you can still depend on late career U2 to provide dull and lifeless pop rock. Even with the inclusion of Indian choir vocals courtesy of composer A.R. Rahman, it still somehow manages to be utterly flavourless.