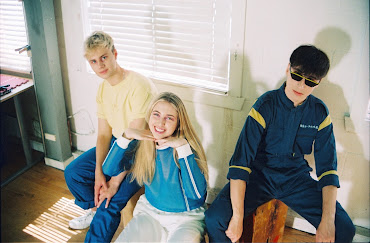 This week features heart emojis, Bop It and an unexpected guest feature from Elton John.

‘Heart Emoji’ is a funky bop about falling in love with someone online through pictures, bios and emojis. I've heard a few emoji-themed songs and they've all been 🤮 - but this track is 🔥!!! At its core, it’s a simple and catchy pop song. However, the band spice it up by adding groovy bass riffs, splashes of piano and a warped guitar solo towards the end (or is that a synth solo – I can barely tell). All in all, I’m loving their sound ❤️❤️❤️.

Peach Luffe are a Toronto-based indie dreampop group (who I've featured before on this blog). According to the band themselves, ‘Golden parachutes is about wanting to disappear for a while. Just get on a plane then jump with a parachute and stay off grid wherever we land’. With it’s warm suspended guitar chords, twinkling dreamy synths and pillowy soaring vocals, the song definitely makes you feel as if you’re floating away to a better place. The track comes off Peach Luffe’s latest EP Shimmer, which you can stream here.

This track couldn't be any more different to last two tracks. Realize are an industrial metal band from Arizona that don’t use live drums or amps (*metal elitists have left the chat*) as to create a deliberately digital take on metal. ‘Disappear’ is a relentlessly heavy track made up of ten ton downtuned riffs and mechanical drums that plays out like two Transformers having a battle. The vocals are a bit weird, but unique at the same time (he sounds like he’s trapped in a box and he’s yelling to get out). Check out their new album Machine Violence on Bandcamp.

‘Where The Sun Sets’ – Bearcraft

Halloween’s around the corner and I’ve already had quite a few creepy songs land in my inbox. This track from Bristol electro group Bearcraft is the full package – it’s made up of frosty unsettling synths and haunting Kate-Bush-esque vocals, all accompanied by a suitably eerie music video.  The track comes off Bearcraft’s new album Fabrefactions.

Turning the Bop It instructions into a catchy hook should have been easy. Somehow these guys have messed it up - the song is sloppy and boring and a complete discredit to the lovably frustrating 00's toy that it's named after. Alas, 'Bop It' is not a bop.

Upon seeing the names Gorillaz, 6LACK and Elton John on the same track, my initial thought was: ‘how the hell is this going to work?’. Answer: it doesn’t really work at all. The song starts off pretty promising with each artist being given their own verse, but it then turns into a garbled mess in the second half with them all erratically singing over the top of one another. 6LACK and Elton John couldn’t have less chemistry if they tried.