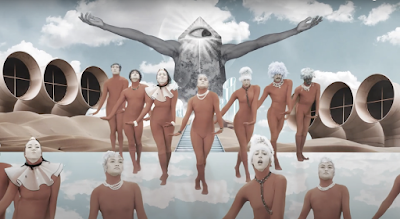 This menacing and chaotic new track is the work of UK noise rockers, Black Midi. Frontman Geordie Greep delivers folksy prose over machine gun bursts of guitar and violin that periodically give way to dramatic and suspenseful pauses. About two thirds of the way through, the track then disintegrates into a Behold-the-Arctopus-style prog freakout. All of this is accompanied by a psychedelic dance choreography, which plays out like one of Dr Suess’s nightmares (THAT ILLUMINATI THING WITH ARMS IN THE BACKGROUND IS TERRIFYING). It’s the most inappropriate song to have a dance choreography to – and yet the band pull it off spectacularly. A new album will be dropping this year.

Tune-yards are back with their typically eccentric style of indie pop. A patchwork instrumental of shuffling drums, fidgety bass and sporadic keys provides a fun backdrop for Merrill Garbus’s dynamic voice. It's both frenetic and catchy. They’ve pretty much copied that Anna Meredith video from a couple years ago with the toy train, but I’ll let that slide.

Psychedelic r&b artist, brushstroke (all lowercase), has released a new track titled ‘Lucid’. It’s got a similarly lo-fi quality to his last single ‘Freeze’ – the chords that open that track sound particularly gauzy as if they’re been played through an ancient gramophone.  The track becomes more ‘lucid’ as the rest of the instrumentation and vocals come in. It’s punctuated by a killer chorus and to top it off there’s an exciting beat change at the very end.

Melbourne artist, marigolden (again, all lowercase. I’M NOT JUST BEING LAZY WITH THE CAPS LOCK BUTTON), delivers this hypnotic soul track titled ‘Just Like Smoke’, which is lyrically centred around embracing impermanence. It opens with her semi-singing-semi-rapping over sparse percussion and jazzy guitar chords. It gradually develops into a fully-fledged song with extra instrumental layers joining the mix. The fluttering chorus is also very pretty.

While checking out the new Justin Bieber track ‘Peaches’, I stumbled across this much-more-interesting pop song from an artist called Peach PRC. It’s a breakup anthem that pulls no punches – the chorus is literally ‘fuck off, stop calling me Josh’. The cutesy delivery somehow makes it all the more badass. She’s like some sassy version of Carly Rae Jepsen. Must suck to be Josh right now.

The piano backdrop is remarkably boring. Her delivery of ‘down at the Men In Music Business Conference’ feels very clunky. And I’m not sure why she’s chose to spend the whole song singing out of her vocal range. Yeah, this new Lana track is not the one.