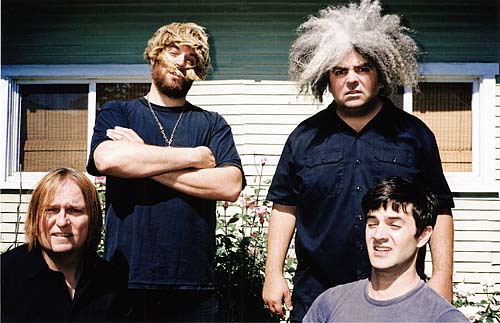 Noise rock and nineties-nostalgia make up the bulk of this week’s gnarliest new tunes.

Corniness works when there's a self-aware sense of humour to it. With it's nineties-rave piano rolls and Seinfield slap bass and drunkenly distorted vocals, this track is certainly corny. But judging from the singing cosmic disembodied yorkie head in the video I don't think it takes itself at all seriously. Embrace the cheese, buy some fluffy dice and bump this in the whip.

'May Peace Be Upon You, Brother Part iii' - Charivari


Dissonant guitar leads snake their way over a swamp of fuzzy bass to the racing pace of a pounding d-beat in this noisy rock instrumental from Bath-based band Charivari. The title may promote peace, but sonically this makes me want to slap on some warpaint and charge into battle.

‘If I say no I’m a bitch, say yes I’m a slut’. This bouncy pop song from Kendrick Lamar collaborator, Anna Wise, has a feisty feminist message behind it whilst remaining innocently cutesy. I can’t decide whether to burn a bra or bake a pretty cake in support.


This old-skool-flavoured EDM instrumental cycles through synth stabs, rolling piano chords and a speedy Space-Jam-esque breakdown, keeping mainly to the same chord progression throughout but never offering a lull. There's barely time to breathe. 'High on Hope' is scheduled to be a bonus track on an upcoming posthumous DJ Rashad album titled Afterlife.

US rockers Melvins practically invented sludge metal and here they show off their sludge skills in this mucky, bustling riff-fest. A new album, Basses Loaded, is scheduled to drop soon sporting six different bass players although I don't think they all play at the same time (that's more bass than my bowels can handle).

Rihanna’s recently-released repetitive pop single 'Work' gets a cringeworthy cover from Joe of the Jonas Brothers and his new band DNCE. His choice not to appropriate the singer’s Caribbean accent is wise, but in his flat white male tone it just ends up sounding like bad karaoke.