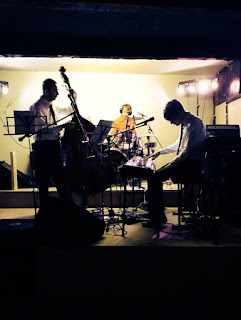 In this brand spanking new section of my blog I’ll be introducing and interviewing unsigned up-and-coming artists. I’d like to kick things off by presenting to you balmy Bolton band, Limbs.

Making up the group’s line-up are Martin Roscoe (drums), Mark Jones (double bass) and Michael Chadwick (piano and mouth). Described on their Facebook page as ‘Plinky Plonky Pop’, their sound is one-third piano-rock, one-third dark comedy and one-third fuck-knows-what. Imagine Tom Waits, Elvis Costello and Blur all meeting in an dimly-lit pub-cum-bingo-hall with a dusty piano and you’ve got the vibe.

‘Pencil Shavings Pop’ is their latest EP, available to stream on their Bandcamp page. It’s a gritty sonic journey involving sterilised test tubes and crisp packets poking through the snow, capped off with a spoken-word surrealist trip on the elevator of life.

The imagery throughout is hilariously vivid. I was particularly amused by the description of the old lady complaining about the ‘gyrating interactive filth she keeps seeing when her fingers wonder up the dusty end of the remote control’.

Eager to delve deeper into the warped minds behind this project, I decided to interview the band about their new EP, amongst other logical topics such as pizza and amputation. Frontman Michael Chadwick was happy to take part...

Okay, first off, imagine that your band is a pizza. What toppings would it have? (hopefully, not pencil shavings…)

Michael: I think if you're launching a new pizza into an already saturated market you have to really go for it to make sure you stand out from the crowd. So a Limbs pizza would have to be topped with severed limbs. Hamster, mouse, wasp, cat... any limb under 12 inches. You have to go in hard and let customers know that you're not messing about. Owl too, leg not wing.

Mark: Well I always have a margherita with jalapeño and anchovies. A classic format with some curve ball twists, much like the band, oh and with peppers for crunch, because Martin always needs a bit of crunch on his pizza.

Describe the meaning behind the title of your new EP, Pencil Shavings Pop?

Michael: Its how I describe our style of music. Pencil shavings go straight in the bin, nobody has ever found any use for them, they're a by-product, like nuclear waste. There's not much in the world that can't be re-purposed so pencil shavings are pretty exceptional. I think our strange little songs are like pencil shavings. I like to think there's someone out there who collects pencil shavings in little jars and has thousands of samples displayed on shelves, all different colours and wood types. I like to think that person listens to Limbs. I think I may be that kind of person... let's talk about your track ‘The Elevationist’. It's brilliantly surreal. How do you go about composing a song like that?

Michael: I was in a lift and there was a lift guy and I was going to the top so I had a lot of time to think. In that situation you can either break the tension and chat about the weather or stay quiet and wait it out. Being British I stayed quiet and that tension made me think about what he was thinking and I started to realise that this was just his everyday job, I was probably his 100th passenger that day, to him this is mundane, not horrendously awkward. I'm the same when I get my hair cut, I go in thinking the hairdresser is looking at me thinking “what the hell is that? You want me to cut that? Is he for real?” but really they don't care, my hair is nothing to them. Anyway, after thinking all this I said to myself, stop being silly, relax, say hello. So I came out the corner and looked over at the porter... he was terrified! He was sweating, holding his breath and not blinking. He just wanted me to get out. That led to the idea for The Elevationist. I wondered what would someone would be like after working such a high pressure job for 20 years?

Have any of you ever been stuck in an elevator before?

Michael: I was actually born in a stuck lift, lodged between the 1st and 2nd floor of Bolton Hospital, in legal terms that's what they call a “no mans land” so there were serious issues when it came to filling in my birth certificate. No one knew what to do. It was great for my Dad though, he was a fireman at the time and got the call to come and break us out, he said it was like he delivered me into the world. There's a picture in the paper of him pretending to cut the cord with a fire axe.

That's incredible! What are your gigs like? Any funny stories?

Michael: Gigs are always a lot of fun, recently we were playing a pub and suddenly the police burst in with sniffer dogs and blocked the exits. Everyone got frisked and sniffed for drugs as we had to just carry on playing. Being clever bastards we started playing the theme tune to The Bill, but it was too hard so we quickly tried to segue out of it. One of the policemen came up to us at the end and showed us the chords, he was actually very sympathetic and said it was a brave effort as the tune uses “police harmony” not the conventional harmony we knew. Apparently they are taught in police bands to voice chords differently so other policemen can recognise them as police. Did you know that? Its secret communication useful in many situations when they are undercover. I sold him a C.D.

Arms or legs? Which limbs could each of you least live without?

Michael: Sorry legs, you gotta go. I'd just have to get help with the piano pedals. There was a guy in America I heard about who played piano in a freak show and he had no body. I think that's where we belong. Someone once described us as a Belgian circus band.

Mark: Has to be legs, only need them for keep fit and mobility issues ... plus wheelchair basketball is cool.

Michael: He's really keen to get rid of them, they have held him back for too long.

Haha I'd probably lose the legs too in all honesty. I can't imagine typing out blog posts with my toes (I guess I could still use voice software but that would be too sensible). Let's talk influences. On your Facebook page you list Radiohead as an influence (I’m also digging that you mention Tom Waits and Flanders and Swann!). On the theme of limbs, what’s your opinion on Radiohead’s last album The King of Limbs?

Michael: Flanders and Swann are the British Tom Waits, are you a fan?

Michael: Mark our bass player looks like Flanders and our drummer looks like Swann. It's something we are very proud of. Tom Waits, Radiohead and Flanders and Swann are all experts at combining music and humour without straying into the toe curling “comedy song” minefield. The King of Limbs is fantastic! As always with Radiohead you have to put the effort in and let it grow on you like a beard. It's itchy and feels weird at first but then it blossoms into something you can't imagine being without. I've never had a beard, but thats the impression someone with a big beard gives off.

Agreed - especially the beard analogy. What exciting plans can we expect from Limbs in the future?

Michael: A new musical, our second. It's called “Idle Hands” and is about angels meddling in business on Earth. It's written by Dick Perkins who is Bolton's premier ideas goldmine. We have written the music and we are at the early stages of assembling a team of people to help get it staged. I'm really looking forward to that, its not your typical musical, it includes a big angel choir and no dancing. Plus we are recording a new E.P of songs too, it should all be done in the next couple of months.