Throw your radio in the skip and surrender all sanity. It’s time to get acquainted with yet another bonkers band, Shifty Chicken Shed.

Hailing from Oswestry, Shropshire, UK, Europe, Earth, this six-piece happen to be pioneers of their own unique genre dubbed ‘Charity Shop Pop’.

Utterly unglamorous and yet excitingly eclectic, their sound is a tawdry-£5-rail-second-hand-selection of frayed funk, ragged rock, booze-stained blues and vintage vaudeville. A saxophone and a cornet serve as a lively addition to the usual line-up of vocals, bass, guitar and drums.

Mr pergolas Ever Creasing Shirt is their latest album, themed around the tale of a drunken gambling addict going through marriage problems. That may sound like dark and depressing subject matter but I remind you that this is a band called Shifty Chicken Shed. ‘We’re doing a deal on Wellington boots/ Buy four pairs and get the soles free!’ is about as sombre as the lyrics get.


Amused and bemused by this brilliant band, I decided I would get to know them a little more by hosting an interview, the tone of which I predicted would be an equally serious affair. Read on for an earnest explanation of the group’s band name, gritty details of future movie plans and an austere answer to the long-debated chicken/egg causational dilemma that has baffled philosophers and scientists for decades… 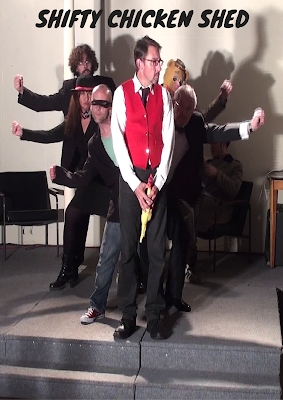 Okay so first off, I’m curious about the name Shifty Chicken Shed. Fill me in.

SCS (Shifty Chicken Shed): SCS (Esh She Esh) started with Innes Reid, guitar and vocals and Stewert James former bassist/gob-iron-ist back in 2008. Undoubtedly Shifty characters. They chose to hone their combs in a chicken shed. The chickens moved house. Esh She Esh were home to roost!

Which came first the chicken or the egg?

I’ve watched videos of your live shows and they look pretty demented. I need to attend one. What can people expect from a Shifty Chicken Shed gig?

SCS: Don't expect, accept the unexpected. This is... 'charity shop pop'!  Barry Bazmatron Edwards summons the spirits of Animal and Tony Williams, fusing drums and pizza and taking it home to groove in Hermon Chapel. A raucous bass, Michael Cusato, rumbles deep. Mixing the funk of Larry Graham with the work hardened matter that is Pete Entwistle. Innes Reids guitar slashes and slides to render a hypnotic state of affairs, from Beefheart to Dr Feelgood with a Tom Waits holler sporting a farmers jig. The mood is set, for the master of ceremonies, Dean Murray Newton, to vent spleen and question? Hand in pocket an unsuspecting Preacher man. But wait! There's more! Wot? A wailing sax or two, that never comes up for air, Deborah Harris domineers the affair. When she's done with the horn, she'll serenade with a velvet tone with the occasional 'OH FUCK IT LETS BELT IT OUT '. Mr Dandlion Dewi Griffiths with his grey Funkadelic hair and mellow cornet vibe completes the hotch potch tribe that is Esh She Esh!

You’ve played with the Blockheads three times now. What’s that like?

SCS: When you're a big fish in a small pond like us, it's all in a day’s work. It's alright for the third time as long as you're on drugs with a hangover. It gets a bit tiresome when The Blockheads are trying to get photo opportunities with the band. Posting them up on Facebook just minutes after quoting, this is us with Shifty!.....etc etc

I'm sure you've got some great gig stories. What's your funniest?

SCS: Once upon a time on arriving at The Cavern in Liverpool to unload about 6 years ago, we shunted our gear through a crowd of men dressed in just g strings and 30 year old women cat fighting. The band were verging on splitting up after starting a riot in  McFood when one of our members was found to be pissed out of his head with a bottle of gin in his inside coat. When we finally got on stage our bass player projectile vomited into his hat through nerves, the banjo player was playing the right chords but alas he was playing a banjo. The drummer decided to play a trombone so the drunk got on the drums. And they all lived happily ever after.

SCS: Have you got any leads? He owes us money!

70s psychedelic prog rock band Gong are an influence on you guys (I discovered that through your Facebook page). Thank you for introducing me to them, they’re quite the trip! Are there any other quirky bands that have influenced you that people ought to know about?

Sorry, what was the question?

SCS: The Bear has been spotted in act 2 Scene 2 but he shot off on a bicycle to the words Fat Arse. None of our friends can act, neither can we. So if you think you'll like a movie with bad acting, all shot in our homes with copious amounts of drugs and booze, then this ones a 8.2 on IMDB! Sundance here we come!

I expect tickets to the premier! What else does the future hold for Shifty Chicken Shed?


SCS: As Eckhart Tolle said, 'The Power of Now' and bed before Ian Jones turns up with Stella and wine on a Monday.