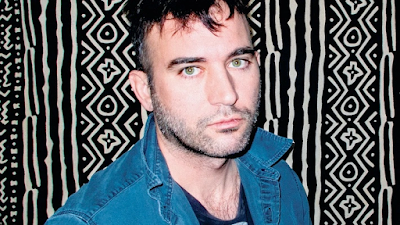 Sufjan Stevens is dropping a new album in September titled The Ascension and this phenomenal over-twelve-minute single, ‘America’, is our first taster. The track is a commentary on the downfall of America in which Sufjan seems to be questioning his faith in God (or possibly humanity), summed up with the simple but powerful hook ‘don’t do to me what you did to America’. It's one of the best tracks I've heard from Sufjan Stevens and possibly the best track I've heard all year (although that isn't to say the other tracks featured this week aren't bloody fantastic either. Check them out too!). It combines the introspective vulnerability of Carrie & Lowell and the larger-than-life epicness of Planetarium. The genre-bending instrumental builds and builds to an almighty climax, while Sufjan's exasperated lyrics seem to grow in despair. Towards the end it dissipates into dark ambience as if giving in to the oppressive bleakness. But in the last couple minutes, things brighten up - a suggestion that there is still a light at the end of the tunnel and that, as bad as things get, there is always hope.

Boston indie band Krill is back. Oh wait, no they’re Knot (I couldn't resist the pun). Krill have reformed as Knot and have released this new single ‘Foam’ as the first taster of their new sound. It’s cleaner, but otherwise has undeniable Krill vibes. Frontman Jonah Forman continues to sound like Kurt Cobain being strangled and yet it perfectly compliments the wacky lyrics (‘the morning’s jaundiced eye squints back at me’ is my favourite line) and the nutty guitars (the outro riffage is so fun).

With its stabbing robotic production and digitally-filtered vocals, this experimental pop track from Melbourne-based artist Katie Dey feels like it was created in a virtual world. In some ways, it was – the track was written and recorded during quarantine, while deprived of human contact and forced to communicate virtually. The video, forged entirely inside the in-game world of Second Life, further captures this virtual world theme. Katie Dey will be releasing her fourth solo album mydata on July 27th.

Whispered vocals float along to an instrumental of dreamy guitars and pillowy keys in this new song ‘Victim’ by Montreal artist Yves Jarvis. It’s as soothing as being tucked into bed - if you can ignore the juddery, anxiety-inducing visuals, which seem to be at complete odds with the music. In fact, the anxious lyrics aren’t particularly soothing either, described by Jarvis as ‘a tightrope walk between victim and victor’. All in all, it's like listening to an ultra-soothing panic attack.

This rock anthem from Hull band Let Man Loose perfectly captures the thrill of the honeymoon phase in a relationship. Even if it does feel like the singer is throwing out every idiom in the book, his commanding vocal tone makes it all sound exhilarating and the walls of ultra-fuzzy guitars and stomping drums had me headbanging so hard that I now need a neckbrace.

A lot of these modern ‘e-boy’ pop artists aren’t for me, but Columbus singer/producer Brakence is definitely breaking new ground. The jittery production is really creative and he’s the first dude I’ve ever heard sing about banging a girl’s boyfriend.

As much as he wants me to, I don’t think I can bring myself to ‘hate’ Desiigner. I reserve my hate for murderers and sex offenders and, last time I checked, Desiigner hasn't done any murdering or sex offending. His monotone rapping does suck though.

This is sad pop for 14 year old girls who’s idea of ‘sad’ is not getting invited to a party.