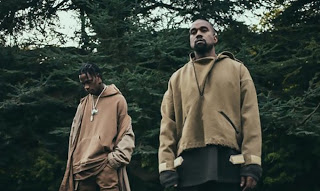 Is the new Kanye album going to be a Christian version of Yeezus?

With it's fuzzy guitars and woozy vocals, this totally sounds like it could be a Smashing Pumpkins hit from the 90s (okay, maybe there’s a hint of Deftones in there too) and I’m all for it. They’ve even nailed the blurry grunge aesthetic in the music video. The Houston rock band will be releasing a double LP titled 12th House Rock on August 28th.

UK EDM duo Disclosure are dropping their third studio album Energy in August. I've been so-so on the previous singles, but this latest track is a banger. It’s a bouncy house tune with some energetic bars from US rapper Amine and UK rapper Slowthai. The dude on the stretcher doesn’t look like he’s having a good time.

The new album from Dublin rock band Fontaines D.C. is almost here. All three singles leading up to the release have been excellent - this latest single is 'about the echo chamber, and how personality gets stripped away by surrounding approval' according to frontman Grian Chatten and is accompanied by a relentless Prodigy-like bass riff and layers of rugged guitars. The vocals are a tad repetitive, but they do add to the hypnotic feel of the track.

Rock songs with cool bass riffs seem to be the flavour of the week. This track from Swedish band Calvin Decline (I love the band name) cruises along to a simple but mesmerising bassline topped with splashes of reverb-soaked guitar and moody vocals recounting the anti-climatic end of a night out. It's got the retro production quality of a 70s Stooges track. The 'taxi, won't you just call taxi' part of the chorus meanwhile reminds of the 'she's got it, baby she's got it' part from Bananrama's 'Venus' (Sorry if I've just completely ruined the song).

'Wash Us In The Blood' - Kanye West ft. Travis Scott

Do I like this? The lo-fi beat definitely slaps, but the flow isn't particularly original and the 'holy spirit, come down' chorus and bible references suggest he’s still going down this Christian rap route. That said, the lyrics have got a refreshingly darker tone than the hallelujah-praise-the-lord trite he was spitting on Jesus Is King. It has me excited for the upcoming album (reportedly titled God's Country) and I've already played the track more times than I can count - so I guess I must be digging it.

Interesting cover of ‘Wonderwall’. Who the heck is Trevor Daniel?