Review of 'Notes On A Conditional Form' by The 1975 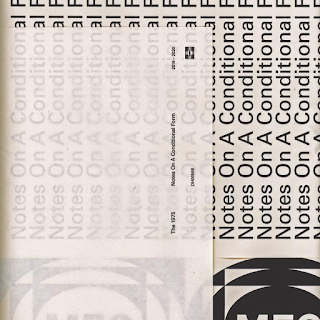 Notes on a frustrating album.

The 1975 are a… are a… you know what, I’m not entirely sure what type of band they are anymore. The UK group began as Savage-Garden-meets-The-Police indie pop act, but by the time they reached their second creepily-titled album I Like It When You Sleep, For You Are So Beautiful Yet So Unaware Of It (the first and last album I’ve ever listened to by the 1975), they had already branched out into other genres ranging from electropop to shoegaze. The album had some INXS-style bops towards the beginning that I enjoyed, but I personally found the majority of it to be a mushy meandering slog.

I never listened to the band’s third album, A Brief Enquiry Into Online Relationships, but judging from the diverse singles I heard from it, it was another multi-genre affair. The band’s fourth album, Notes on a Conditional Form, sees them continuing to become more unclassifiable. There were reports that this was going to be an ‘emo’ record during its making. I can categorically confirm that this is definitely not an emo record (it’s probably the one genre not covered on this album).

The album opens with an orchestral ambient piece topped with guest vocals from climate activist Greta Thunberg. No, she’s sadly not singing or rapping – it’s simply a spoken word speech rallying listeners to start taking climate change seriously (an important subject that I agree with – big up Greta Thunberg!).

The record then launches into shouty, sweary punk track ‘People’ (the track that sparked my curiosity to listen to this album and possibly my favourite cut from the tracklist). Despite the dramatic change of pace musically, it’s an equally urgent rally to ‘wake up’ and start taking the world’s problems seriously. So this is going to be a politically-charged call-to-action album, right? Wrong.

After another ambient interlude (sans Greta Thunberg vocals this time) that completely kills the momentum of the album, we get a half-baked Burial-style garage track dedicated to Healy’s struggles with anxiety titled ‘Frail State of Mind’. After another ambient instrumental (what is it with these ambient interludes?), we then get a slow Americana track about being at a house party titled ‘Birthday Party’. At this point, we’ve strayed a long way from the topic of climate change and any sign of an overarching theme is nowhere to be seen. It’s clear this album is going to go wherever the hell it wants to go.

What’s next on the menu? How about a 90s flavoured alt-rock track about heartbreak? How about a gospel/hip hop track with pitch-shifted vocals? How about some 80s synthpop? There’s even a trap song in the mix titled ‘Shiny Collarbone’ (There’s-Even-A-Trap-Song should be a genre of music to describe albums like this). This genre-meddling continues for 22 tracks, concluding with homoerotic soft rock closer ‘Guys’.

Most of my favourite albums are genre-meddling albums. But I found this album to be a similarly frustrating slog to I Like It When You Sleep, For You Are So Beautiful Yet So Unaware Of It. Why did this not excite me the way Childish Gambino’s 3:15:20 did or The Garden’s Kiss My Super Bowl Ring did?

I think there are a number of reasons as to why I don’t like this album (and The 1975 in general). Despite containing a Greta Thunberg speech, a homoerotic love song and a multitude of genres, this band aren’t as revolutionary as they may like to believe. The band are talented musical chameleons, but they rarely create their own exciting hybrids, preferring to replicate existing styles of other artists. They also have a penchant for watered-down genres whether it be lazy Americana, tepid EDM, soft rock or orchestral ambience. Matty has some edgy lyrics, but for the most part it’s mushy love songs.

There are a few exceptional tracks that are daring and exciting. These include the already mentioned angsty punk anthem ‘People’ – which is daring in every aspect. With its reggae-esque groove and warped Temptations samples, ‘Tonight (I Wish I Was Your Boy)’ also feels like one of the few attempts to create a new sound rather than mimicking others. ‘If You’re Too Shy (Let Me Know)’ is also an undeniably fun synthpop track – even if it’s not doing anything new, it has a lot of energy.

The remainder of the album I found to be fairly bland. Combined with its lack of focus and horrible pacing (every time there’s an upbeat track, an ambient interlude comes along to kill the momentum), Notes On A Conditional Form is an album I’ll only ever listen to again in its entirety on the condition that I’m drunk or I’ve got a gun to my head.